A man who was shot dead by French police today as he tried to attack a Paris police station was wearing a "fake" suicide vest, police and government sources said.

The Paris prosecutor said the man was carrying a mobile phone and a sheet of paper with the flag of the so-called Islamic State and a claim of responsibility.

He has been identified as a Moroccan-born homeless man who identified himself as Sallah Ali.

Born in Casablanca in 1995, he reportedly had been convicted of theft previously.

Francois Molins said that given the circumstances the events would be investigated as a terrorism incident.

A judiciary source said the man had a knife, while under his coat he had a pouch around his torso with a wire hanging from it, but the "apparatus contained no explosives".

The man was also heard to shout "Allahu Akbar" as he approached the police station in the neighbourhood in the north of the capital, the interior ministry said.

Interior ministry spokesman Pierre-Henry Brandet said the man attempted to attack a policeman at the reception of the police station before being shot by the police.

The attempted assault comes on the first anniversary of the terror assault on satirical magazine Charlie Hebdo.

The population of the Goutte d'Or district where the incident occurred is predominantly of north African and sub-Saharan African origin.

News of the attempted attack came after President Francois Hollande addressed New Year's greetings to France's police and gendarmes, and called for greater cooperation between the security services. A witness told AFP he had heard "two or three shots" in the incident that occurred a year to the day that brothers Said and Cherif Kouachi shot dead Charlie Hebdo staff as well as several others in and around the magazine's building, killing 12 people in total.

The 7 January shootings at Charlie Hebdo were followed by an unprecedented series of killings in subsequent months that culminated in the IS attacks on Paris that left 130 dead.

France is holding official ceremonies marking a year since the attack on the office, with the French satirical magazine defiantly reasserting its provocative spirit.

The reforms aim to introduce measures including more flexible rules of engagement for armed police and stronger stop-and-search powers.

Charlie Hebdo has continued to raise ire, refusing self-censorship in the wake of the attacks, working from ultra-secure offices in a top-secret location.

The cover of the anniversary edition features a bloodstained, bearded god-figure in sandals with a Kalashnikov slung over his shoulder under the headline: "One year on: the killer is still at large."

The controversial cover is typical of the fiercely secular publication whose drawings of the Prophet Muhammad drew the fury of Muslims around the world and inspired the bloody attack on its offices.

The attack, claimed by al-Qaeda's branch in the Arabian Peninsula, was not the first on the publication, which was firebombed in 2011. 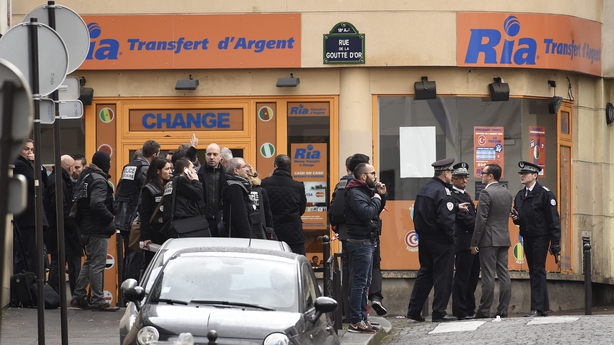 Charlie Hebdo, a struggling publication that gained bittersweet fame after the attacks and became a symbol of freedom of speech, has printed one million copies of the anniversary edition.

While millions rushed to buy the first edition after the attack, circulation of the controversial publication has slowed to about 100,000 copies a week and there were no crowds trying to buy the anniversary edition.

The Vatican criticised the anniversary edition's cover for failing to "acknowledge or to respect believers' faith in God, regardless of the religion".

"Behind the deceptive flag of uncompromising secularism, the weekly is forgetting once more what religious leaders of every faith unceasingly repeat... using God to justify hatred – is a genuine blasphemy, as Pope Francis has said several times."

Tomorrow marks the one year anniversary of the Charlie Hebdo attack in Paris. Explainer via (@jimmybeattieRTE) https://t.co/gVILQVRkpz