A powerful earthquake has struck India and Bangladesh, killing at least 11 people and injuring nearly 200, with efforts to rescue those trapped in rubble hampered by severed power supplies and telecommunication links.

The US Geological Survey said the quake of magnitude 6.8 was 57 kilometres deep and struck 29km west of Imphal, the capital of India's northeastern state of Manipur, bordering Myanmar.

Shockwaves were felt in the Himalayan nation of Nepal and as far away as the Myanmar city of Yangon, approximately 1,175km to the south.

The earthquake struck while many residents were asleep, and roofs and staircases of some buildings collapsed in the city of about 270,000 people.

"It was like being tossed around in a frying pan," said a 33-year-old employee of state energy firm Bharat Petroleum. "Then we ran outside."

Police and hospitals in Imphal said the toll had reached six dead, with 100 people injured, 33 of them seriously.

Officials in Bangladesh said as well as the five people who died of heart attacks as they fled buildings, about 90 people were injured.

Rescue workers in Imphal used hand-held drilling machines to clear rubble from the ruins of a six-storey building under construction, the site of the heaviest damage in the city.

Rescue workers battled to find workers believed to have been buried beneath the rubble of a building that had been construction. They were unsure how many might be trapped.

Residents of Imphal said people fled their homes and power and telecoms links were down in the remote region.

At the airport, flights were normal, although a boundary wall collapsed, and a crack appeared in the terminal building, an airport worker said. 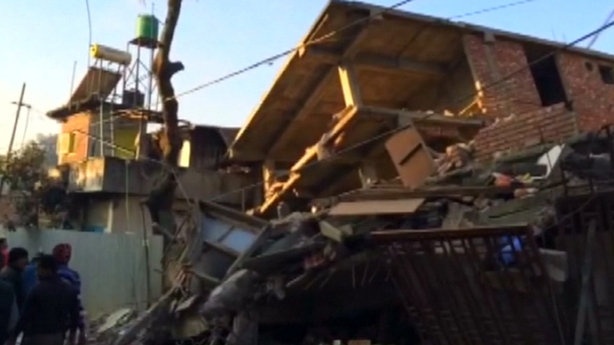 Some people criticised what they called the authorities' slow response, saying that although the army had begun to clear debris, it appeared to be short of heavy equipment.

"We haven't seen any help from the government side," a disaster volunteer worker said. "The government has not given us any information."

The government said two teams from the National Disaster Response Force had arrived to help with the rescue.

The Junior Home Affairs Minister said: "The rescue operations are about to start on a war footing".

Indian Prime Minister Narendra Modi tweeted that he was in touch with authorities in the northeast.

Manipur is one of seven northeastern provinces joined to the rest of the India by a thin strip of territory arching above Bangladesh.

It was the most powerful earthquake to hit the state since 1957, according to academics at the department of seismological research at Manipur University.

An official at Myanmar's meteorological department in Naypyitaw, the capital, said there were no reports of damage or casualties on the Myanmar side of the border.