Storm Frank has caused havoc across the country as ferry sailings were cancelled, roads closed and a car was blown into the Shannon.

Around 5,000 homes were left without electricity earlier today. Affected homes were in Donegal, Mayo, Kerry, Cork, and the south-east.

ESB Networks crews are working to restore power but they are having to deal with the difficult weather conditions. The company had restored power to most people by this evening with just over 1,100 homes still without electricity.

Gale force winds and gusts led to extensive flooding and a partial breach of sandbag barriers in many parts of Athlone tonight.

Southerly winds brought floods into residential areas at the Strand and at Deerpark.

The Minister for the Environment Alan Kelly and the OPW Minister Simon Harris are both to visit Athlone tomorrow afternoon to meet with victims of the flooding who have been critical of the lack of government ministers in the flood areas of the midlands.

There was substantial flooding in Graignamanagh this evening in Kilkenny.

In Roscommon, emergency services responded to an incident at Ballyleague at the top of Lough Rea where a car, unattended, was blown into the River Shannon.

The car was swept across the River Shannon and was visible for up to half an hour before it became submerged.

Members of the Lough Rea sub-aqua club supported the emergency services in an attempt to recover the car from the water.

Meanwhile, Galway City Council closed the roads adjacent to Salthill promenade. Traffic was diverted from the area and local businesses along the seafront were given sandbags for their entrances.

Waves broke over the seafront wall and flooded car parks and roadways along the promenade at high tide this evening.

P&O Ferries suspended all sailings due to the storm. They anticipate that sailings will resume from 7.30am tomorrow morning. 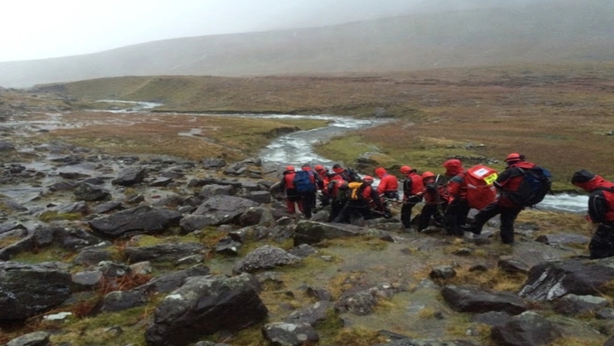 In Kerry, up to 20 members of the Kerry Mountain Rescue Team stretchered an injured climber off Carrountoohil in the McGillycuddy Reeks in conditions described as atrocious.

The alarm was raised at 2.30pm this afternoon when the man fell close to the Hag's Tooth. He is believed to have sustained a broken leg.

The man is aged in his 30s and was among a party of four climbers.

He was taken to the mountain rescue team’s base camp at Lioslibán where he was transferred to an ambulance and brought to Kerry General Hospital in Tralee.

Kerry Mountain Rescue Team has appealed to people to stay away from the mountains while weather alerts remain in force.

Four weather alerts came into force ahead of the storm, which will be the sixth to affect Ireland in recent weeks.

The areas most affected are coastal counties from Kerry and Cork up through Limerick, Clare, Galway, Mayo and into Donegal.

The heaviest rainfall is expected tonight along southern coastal counties such as Cork, Waterford and Wexford and possibly along the west coast.

AA Roadwatch is reporting flooding on many roads because of previous intense rainfall. The N71 to West Cork was closed at the viaduct due to flooding while the 7pm Dublin to Cork train had to terminate at Mallow due to flooding on the line.

Kerry Airport cancelled its 1pm flight from Dublin and its 1.20pm flight to Dublin today because of the storm.

Met Éireann has issued an orange wind warning for Connacht, Clare and Kerry, with gusts of up to 120km/h forecast.

An orange rain warning has also been issued for Wicklow and Galway, and the southern coastal counties, with between 40 and 70mm of rain expected in a 24-hour period. 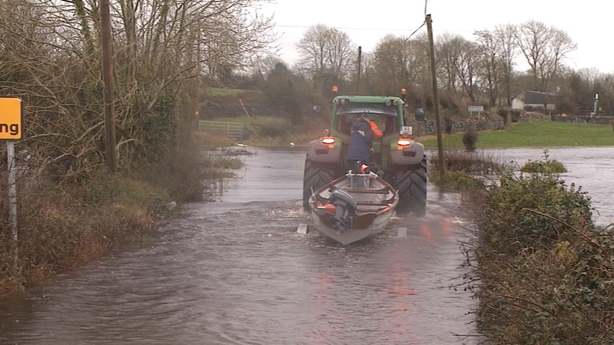 Local authorities have warned the combination of high winds and heavy rain, as well as high tides, will lead to flooding in many areas.

Residents along the banks of the River Shannon, above and below the weir at Parteen, have been warned to expect higher water levels, adding to existing flooding problems.

The Irish Coast Guard has advised the public to stay away from coastal areas, as the storm will bring high seas and drive large waves ashore.

The Road Safety Authority has appealed to drivers to take extreme care if going out on the roads and to be aware that objects may be blown on to roadways and vehicles may be affected by cross winds.

The Irish Farmers' Association has called on the Taoiseach to intervene and instruct Bord na Móna to turn off dozens of water pumps that are sending thousands of gallons of water back into flooded parts of the river Shannon.

Tom Turley of the IFA national flood project committee said the move would ease flooding for landowners and residents in south Roscommon, Offaly and Galway in the next three days as Storm Frank floods the area again.

"It's time the Taoiseach got involved," Mr Turley said. "We haven't seen Mr Kenny in the flooded areas here - yet we have seen his counterpart out in the floods in the UK and among his people."

"His ministers have visited numerous locations affected at his instruction where they have heard at first hand the major challenges people are facing," the spokesman added. 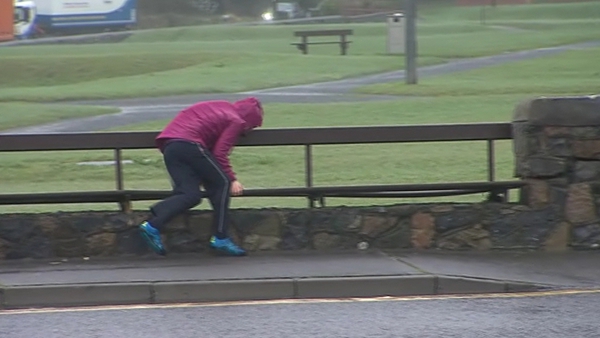