Met Éireann, several county councils and the Irish Coast Guard have warned of extensive flooding across the country as Storm Frank approaches.

Flooding is ongoing in the Shannon catchment area of the midlands causing further damage to properties.

This morning, members of the Civil Defence force provided relief to seven families who had been cut off from the village of Newtowncashel in Co Longford for the last three weeks.

Nearby, farmers and family friends assisted in bringing the remains of a deceased neighbour for burial at Saint's Island.

The elderly man, who died after Christmas, was a resident in the area. The causeway to Saint's Island is heavily flooded by Lough Ree waters, and the man's remains were brought by tractor and trailer along the causeway to the cemetery at Saint's Island.

The ESB has confirmed that the Shannon level on Lough Ree is now fast approaching record levels set in 2009.

In Co Westmeath, residents at Golden Island have expressed concern about an increase in water levels overnight.

Some house owners living along the Shannon near Athlone have called for the army to be brought in in advance of the stormy conditions.

Meanwhile, the army has been deployed to south Galway near Gort to build a sandbag barrier around a number of houses in danger of flooding.

Many other properties between Gort and Kilchreest have been under the threat of flooding since before Christmas.

Speaking to RTÉ News at One, the Irish Coast Guard advised the public to stay away from coastal areas, especially piers, due to the dangerous weather conditions.

He said units of the Irish Coast Guard have responded to a number of incidents today on the east coast of Ireland, in which people with small children in prams got into difficulty.

Met Eireann says there is heavy wind and rain on the way across Ireland as Storm Frank hits. pic.twitter.com/xCTCNNdgPo

Met Éireann has issued two wind warnings for most of the country today and tomorrow.

Winds associated with Storm Frank are predicted to reach mean speeds of 65 to 80 km per hour with gusts of 100 to 120km/h.

A Status Yellow wind warning is in effect for most of the rest of the country.

Winds are forecast to be strongest along coastal areas tomorrow afternoon, evening and early night.

A Status Orange rain warning is in place for counties Wicklow, Galway, Cork, Kerry and Waterford with between 40-70mm of rain expected between 12pm on Tuesday and 12pm on Wednesday.

A Status Yellow warning is in place for the rest of the country, with 25-40mm of rain expected over the same time period. 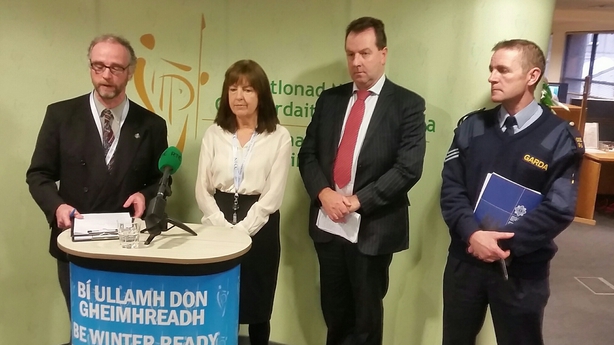 Speaking today at a press conference held by the National Emergency Coordination Group, Jim Casey from the Office of Public Works said that with the exception of in the Upper Shannon Catchment, levels are rising in all other parts of the river.

In the past 48 hours the level has risen by around 6cm around Athlone, and the lower Shannon Catchment has seen levels rise by up to 3cm.

The levels in Athlone are 2cm higher than they were on 16 December.

ESB today advised the flow of Parteen Weir is to remain at the increased water rate of 405 cumecs (cubic metres per second.)

In a statement the ESB said "This level of water flow may have associated flooding to land and property in the vicinity of the Shannon downstream of Parteen Weir including the areas of Springfield, Montpelier, Castleconnell, Mountshannon (Annacotty) and the University of Limerick."

The statement also warned other areas between Parteen Weir and Limerick may also be vulnerable to flooding due to local issues.

The ESB also said water flow is likely to increase in the coming days, given the high levels of rainfall expected in the Shannon catchment.

The ESB said water flow from from Inniscarra Dam will increase to 200 cumecs (cubic metres per second) today,  and that based on the current weather forecast this may increase to 250 cumecs or above in the coming days.

This is higher than the level of water flow yesterday (180 cumecs) and between the 6 and 12 December from the Iniscarra Dam following Storm Desmond.

The situation will be reviewed again tomorrow.

Clare County Council released a statement to warn the "entire country in advance of severe weather conditions that are expected during the next 48-72 hours."

In a statement Limerick City and County Council confirmed ESB's decision to maintain an increased water flow at Parteen Weir.

The Council says water levels along the Lower River Shannon at Castleconnell, Montpelier, Mountshannon Road (Lisnagry) and in the Limerick City area have risen considerably in recent days and further increases are expected this week.

Racing at Limerick tomorrow has been cancelled due to ongoing heavy rain.