Nearly 90 people were killed during Friday's clashes in the Burundian capital, the worst outbreak of violence since a failed coup in May.

Witnesses and journalists in Nyakabiga, a hotspot neighbourhood for anti-government protests in recent months, reported seeing bodies in the street, some apparently shot at close range as the death toll rose to 89.

Other witnesses reported further bodies seen lying in streets in other parts of the city.

One witness described some of the victims as "kids" and said they had been shot execution-style "through the top of the skull".

"It is an absolute horror, those who committed this are war criminals," a witness said.

Blasts and gunfire echoed around Bujumbura for most of yesterday after unknown gunmen attacked three military site.

The clashes were condemned by the United States, which like other Western powers fears the central African nation could slide back into ethnic conflict.

Unrest in Burundi, which started in April when President Pierre Nkurunziza announced plans for a third term in office, has also unnerved a region that remains volatile two decades after the genocide in neighbouring Rwanda.

Residents said some of the dead had been rounded up by the police during the day after house-to-house searches on Friday, an allegation the police denied. 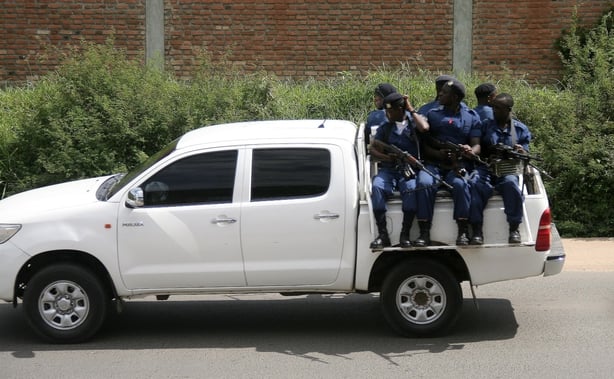 "They entered in our compounds, gathered all young andmiddle aged men, took them and killed them away from theirhomes," said one resident in Nyakabiga.

However, police spokesman Pierre Nkurikiye said there were "no collateral victims" during the clashes.

"All the deaths were attackers killed in the joint sweep operation of the army and police," he said. "The enemy was neutralized."

A government official said the police were collecting bodies across the capital but it was not clear how many people were killed in other districts where fierce fighting also took place.

Willy Nyamitwe, a presidential advisor, called for Kenya Airways to resume flying to Burundi after the carrier and regional rivals Rwand Air and Ethiopian Airlines cancelled flights on Friday.

"Today's flights in and out #Burundi should not be cancelled since the roadblocks are removed. Situation came back to normal," Nyamitwe said on Twitter, addressing Kenya Airways.

Burundi's 12-year civil war, which ended in 2005, pitted rebel groups of the Hutu majority, including one led by Nkurunziza, against what was then an army led by the Tutsi minority. Rwanda has the same ethnic mix.

One of the generals behind the failed coup attempt in May said in July the rebel group still aimed to topple the president and experts have warned that the army, which was restructured after the civil war to include rebel fighters, might fracture.