Global climate envoys agreed a landmark accord, setting the course for a "historic" transformation of the world's fossil fuel-driven economy within decades in a bid to arrest global warming.

The President of the United Nations climate change negotiations in Paris, Laurent Fabius, has said the final draft climate agreement is the best possible balance that could have been achieved.

At the tail end of the hottest year on record and after four years of fraught UN talks often pitting the interests of rich nations against poor, imperilled island states against rising economic powerhouses, French Foreign Minister Fabius took just minutes to declare the pact adopted to the standing applause and whistles of delegates from almost 200 nations.

Hailed as the first truly global climate deal, committing both rich and poor nations to reining in rising emissions blamed for warming the planet, it sets out a sweeping long-term goal of eliminating net man-made greenhouse gas output this century.

It also creates a system to encourage nations to step up voluntary domestic efforts to curb emissions, and provides billions more dollars to help poor nations cope with the transition to a greener economy.

US President Barack Obama hailed the landmark climate accord reached in Paris as strong and historic, calling it the best chance to save the planet from the effects of global climate change. "Today the American people can be proud because this historic agreement is a tribute to American leadership.

"Over the past seven years, we've transformed the United States into the global leader in fighting climate change," President Obama said.

He said the accord shows what is possible when the world stands as one, adding: "This agreement represents the best chance we have to save the one planet that we've got."

Calling it "ambitious and balanced", Minister Fabius said the accord would mark a "historic turning point" in efforts to avert the potentially disastrous consequences of an overheated planet.

In some ways its success was assured before the summit began: 187 nations have submitted detailed national plans for how they will contain the rise in greenhouse gas emissions, commitments that are the core of the Paris deal.

While leaving each country to pursue those measures on its own, the agreement finally sets a common vision and course of action after years of bickering over how to move forward.

Sean Kelly MEP, the only Irish MEP in the European Parliament's negotiating team in Paris, has warmly welcomed the historic climate change deal.

"We set out with a very ambitious mandate seeking a global, binding deal on climate change and I am delighted to say we achieved a very ambitious, balanced deal which will protect our planet for future generations.

"Crucially, the deal was agreed with almost every nation in the entire world in a spirit of cooperation and solidarity", said Mr Kelly, pictured below with Hoesung Lee, Chair of the Intergovernmental Panel on Climate Change. 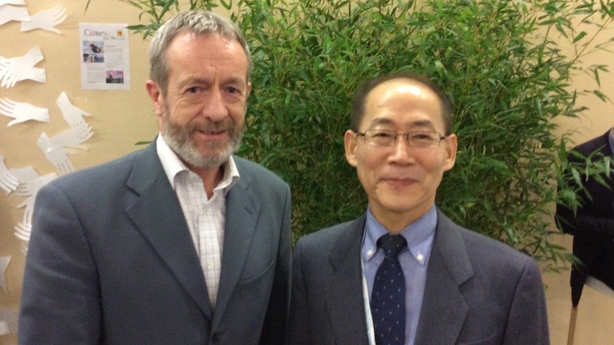 Speaking to the delegations at the conference, he said the global leaders who came to Paris two weeks ago to launch the climate negotiations clearly stated that they wanted a flexible, robust, meaningful agreement.

He said national interests in relation to climate change are best served by acting in global solidarity and that the world needs all hands on deck to tackle the issue.

He urged the delegates, who must now go away and consider the final text before signing off on it later this afternoon to not let their quest for perfection be the enemy of the public good in relation to the details of the deal. Earlier, French President Francois Hollande urged countries to adopt the first universal climate change deal in history, telling them it would be a major leap for mankind.

Minister for the Environment Alan Kelly said: "This historic deal ensures a truly multilateral response to one of the largest challenges facing humanity."

"This Paris Agreement puts in place the necessary framework for all countries to take ambitious action, as well as providing for a transparency system that ensures we can all have confidence in each other's progress.

"It also puts in place the supports necessary - funding as well as technical assistance - for the most vulnerable countries," Minister Kelly added.