David Drumm has been refused bail by a Boston judge and will remain in prison for almost another three months until his extradition hearing in March of next year.

Judge Donald Cabell issued his decision in writing today following a bail hearing which took place in the Massachusetts District Court on 13 November.

Under US law, there is a presumption against granting bail in cases of extradition, except in special circumstances.

During his detention hearing, Mr Drumm had argued that such circumstances did exist, including his family's financial dependency on him, his inability to fight his case adequately from prison, and the significant delay in Ireland bringing the criminal charges against him and seeking his extradition.

But the judge ruled that "after careful consideration of all the evidence", Mr Drumm had failed to "establish the presence of special circumstances sufficient to overcome the presumption in favour of detention in extradition cases", and so denied the request.

Mr Drumm had also made a personal, emotional appeal to the judge during his bail hearing that he be released on bail, saying that he did not pose a flight risk and offered his home and those of three acquaintances as security, in addition to his and his family's passports.

Today, Judge Cabell said he believed that the seriousness of the charges facing Mr Drumm in Ireland, did provide him "with an incentive to flee".

He also said that Mr Drumm's "background and experience in international matters and his presumed substantial assets" also gave him the ability to flee "if he was so inclined".

The former Anglo Irish Bank CEO is wanted in Ireland to face 33 charges relating to his time in charge at the bank.

In his written judgement today, refusing bail, Judge Cabell said that Ireland had "not unreasonably delayed" bringing charges against Mr Drumm or requesting his extradition, and he said there was a "diplomatic need" to seek his detention.

He also ruled that contrary to the arguments put forward by Mr Drumm's lawyers, there was "no basis to believe" that the extradition proceedings would take an "exceptionally long period of time to resolve".

Judge Cabell said he accepted that Mr Drumm's continued detention would "created issues of varying degrees of strain and inconvenience for both him and his family", but he said that there was "insufficient evidence to suggest it would be to such a degree as to distinguish this case from other extradition cases".

Arguing against bail, the US Attorney had pointed to the findings of a US bankrutpcy judge in January of this year, Judge Frank Bailey, who had found Mr Drumm "not remotely credible" as a witness, and said this showed that Mr Drumm's arguments and pledges simply "cannot be trusted".

Mr Drumm faces 31 charges in relation to his role in the so-called Maple Ten transactions, where ten individuals were loaded with €45m each to secure Anglo's tumbling share price.

He also faces two charges in relation to the back-to-back transactions with Irish Life and Permanent, designed to bolster the bank's books.

Speaking directly to Judge Cabell on 13 November, Mr Drumm rejected the notion put forward by the US Attorney that he had fled Ireland in 2009 following the collapse of Anglo Irish Bank, saying that he hadn't run then and wasn't running now.

The extradition hearing is currently set for 1 March, and Mr Drumm will now stay in the custody of the US Marshals until then. 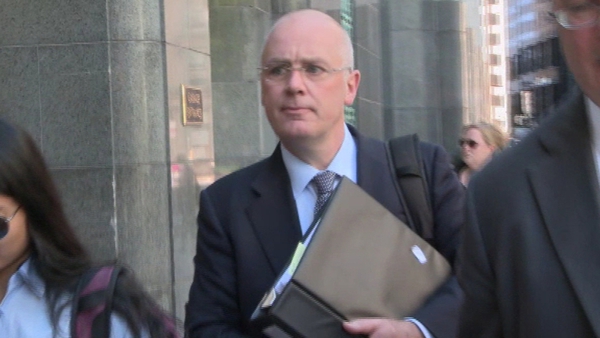