US President Barack Obama has held closed-door talks with his Russian counterpart Vladimir Putin on the sidelines of a UN climate conference in France.

The half-hour meeting between the two leaders - the second this month after an encounter at the G20 conference in Turkey - comes with both nations at odds over Syria and locked in a standoff over the crisis in Ukraine.

"The two presidents discussed the imperative of making progress on the Vienna process to bring about a ceasefire and political resolution to the civil war in Syria," a White House official said, referring to international talks in the Austrian capital on the Syria crisis.

Mr Obama told Mr Putin he believes Mr Assad must leave power as part of a transition, and both leaders said their foreign ministers will continue to work on the diplomatic process, the official added.

Mr Obama expressed regret over the recent death of a Russian pilot after Turkey shot down a Russian warplane at its border with Syria, the official said.

The plane downing triggered Moscow's deployment of an advanced missile system to Syria. Mr Obama encouraged the easing of tensions between Russia and Turkey, the official said.

During the discussion, the US president also emphasised a diplomatic solution to the Ukraine crisis, adding that sanctions against Russia can be rolled back when it honors the Minsk ceasefire accord.

Earlier, Mr Obama joined French leader Francois Hollande to pay respects to the victims of the Paris attacks at the Bataclan concert hall, hours before the official opening the conference. 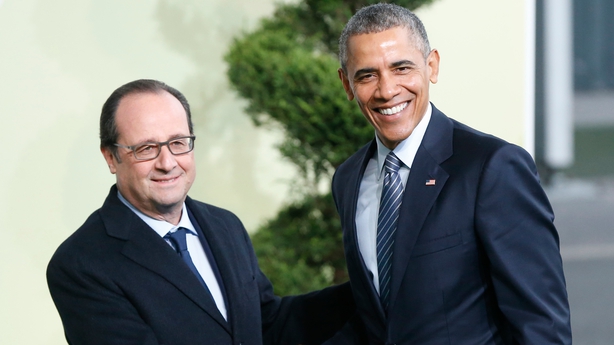 The two leaders, along with the mayor of Paris, Anne Hidalgo, laid flowers at the music venue where 90 people were killed by jihadist gunmen and suicide bombers on 13 November.

Helicopters flew overhead and police shut off the roads around the bloodiest scene of the Paris attacks, with security concerns running high as some 150 world leaders descended on the French capital.

The visit to the Bataclan was announced at the last minute after rallies ahead of the climate talks turned violent, as anti-capitalist protesters clashed with police.

Police fired teargas at protesters, who pelted them with bottles and candles in Place de la Republique where a memorial had been set up for the 130 people killed in the Paris attacks. More than 200 people were detained.

The clashes soured the mood before the start of the talks, known as COP21, aimed at clinching the world's first universal climate deal to limit global greenhouse gas emissions.

Russian President Vladimir Putin will not meet his Turkish counterpart Recep Tayyip Erdogan at the conference, the Kremlin said, as a dispute rages over Turkey's downing of a Russian warplane.

"No meeting with Erdogan is planned," Kremlin spokesman Dmitry Peskov told journalists, after the Turkish leader called for a meeting with Mr Putin at the summit to discuss the shooting down of the plane on the Syria-Turkish border.

Russia and Turkey are at odds over the incident last Tuesday, with Russia announcing a raft of economic sanctions against Turkey and the two leaders engaging in a furious war of words.