British Labour leader Jeremy Corbyn has set the stage for a showdown with his own shadow cabinet after insisting that he alone has the final decision on whether Labour opposes airstrikes in Syria.

The leader again refused to commit to offering a free vote to his MPs as he delivered an impassioned critique of Prime Minister David Cameron's case for attacking the so-called Islamic State in its heartlands.

Mr Corbyn also insisted politicians must listen to the "voice" of the party membership, which overwhelmingly elected him.

The intervention, in an interview on the BBC's Andrew Marr show, is likely to inflame tensions further between Mr Corbyn and his top team amid open warnings of resignations.

The shadow cabinet is due to meet tomorrow to try to hammer out a collective position ahead of a potentially explosive gathering of the parliamentary party in the evening.

In a defiant performance, Mr Corbyn dismissed intelligence advice that IS was using its territory in Syria to prepare terror atrocities against Britain, arguing that "those attacks could be planned anywhere".

He also "seriously questioned" Mr Cameron's claim that there are 70,000 moderate Syrian troops to tackle IS forces on the ground, and voiced doubts about their "loyalties".

Mr Corbyn said a unanimously passed UN Security Council resolution calling for "all necessary measures" against the terrorist groups did not provide justification for military action.

Bombing IS targets in Syria would be a "distraction from the political process" to end the civil war, and would lead to civilian casualties.

Asked whether Labour MPs - dozens of whom are thought to be considering supporting action - would be given a free vote, Mr Corbyn said: "No decision has been made on that yet, I am going to find out what MPs think.”

But asked if the whipping position would be a collective decision by the shadow cabinet, Mr Corbyn said: "It is the leader who decides. I will make up my mind in due course."

Asked if there was any chance divisions in the party could force his resignation, Mr Corbyn said: "I'm not going anywhere. I am enjoying every moment of it."

Defence Secretary Michael Fallon said he had been briefing Labour MPs on military action over the weekend but stressed the British government does "not yet" have a guaranteed majority to back airstrikes. 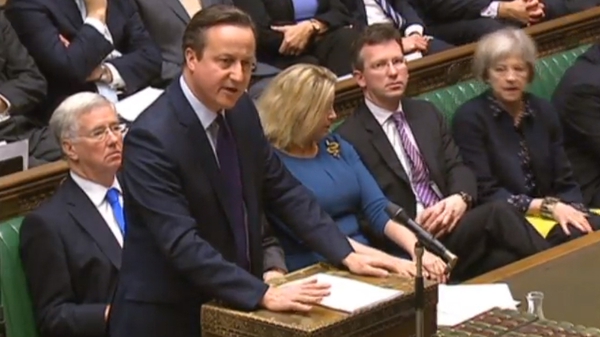