ESB crews are working to restore power to just over 300 customers left without supply after Storm Barney brought down trees on transmission lines yesterday.

More than 45,000 customers were without power yesterday.

Earlier, a spokesperson for ESB Networks said it was confident that most people should have their power restored by tonight. 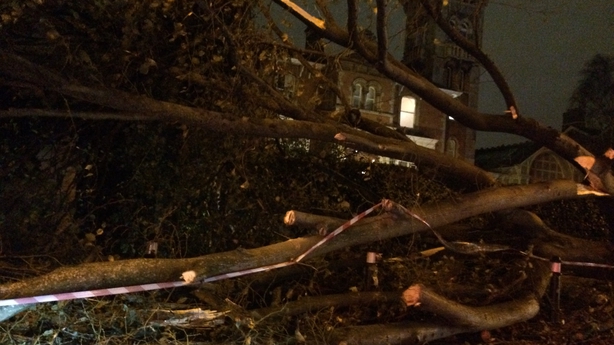 However, it said a small number of customers in some isolated areas may be without power and crews would work through this evening and from first light tomorrow to reconnect their supply.

Around 300 customers were without power overnight in Kerry and Cork. These were mainly in clusters in Ballinskelligs, Castlemaine, Farranfore, Tarbert, Moyvane in Kerry; and in Kinsale, Mallow, Kanturk and Kildorrery in Cork.

Met Éireann has said the worst of the rain has passed but winds will increase throughout the day, with coastal areas the most affected.

The ESB is warning the public to stay away from fallen wires as they may be live and to call ESB on 1850-372999 with reports of fallen cables.

Update on power restoration in the aftermath of Storm Barney 8.00am https://t.co/VddOesR4Gf

Meanwhile, two sports centres in Wicklow are closed until further notice after their roofs were damaged during the storm.

A section of the roof of Rathnew GAA Pavilion landed 500 metres from the building #StormBarney pic.twitter.com/A9p0QosNDG

The Coral Leisure facility was evacuated at 5pm yesterday when staff became concerned about a whistling noise in the building. Two hours later a section of the roof peeled off.