Many Greek workers stayed at home this morning to protest austerity measures, in the biggest domestic challenge to Alexis Tsipras' government since he was elected in September on a promise to cushion the impact of years of economic hardship.

Many flights were grounded, hospitals ran on skeleton staff, ships were docked at port and public offices stayed shut across the country in the first nationwide walkout called by Greece's largest private and public sector unions in a year.

Mr Tsipras came to power in January promising to end the austerity imposed by Greece's international lenders, then accepted the unpopular terms of a third bailout when faced with the prospect of an exit from the eurozone.

Mr Tsipras was re-elected two months ago on a mandate to implement that agreement, vowing to work hard to buffer its impact, particularly on vulnerable Greeks.

Illustrating the political juggling act Mr Tsipras is trying to pull off, his own Syriza party came out in support of the strike, saying industrial action strengthened the government's hand in talks with lenders.

The strike will be the people's "response to the dogmatic insistence in dead-end and destructive policies that have squeezed out workers and have led young people to lose hope", private-sector union GSEE said in a statement.

GSEE and its public sector sister union ADEDY expected thousands to take part in protest rallies planned for 9am.

Strikers will rally in central Athens and march by parliament, close to a hotel where the bailout review talks are taking place.

Central Athens was bustling with commercial activity early this morning, with little sign of disruption.

Two police buses were parked off a central square with a stack of riot shields resting against one; Greek mass protests in the past have been marked by violence.

Some people opted to work. "If I don't work, I don't get paid," said a 23-year-old waitress in downtown Athens.

Government spokeswoman Olga Gerovasili denied suggestions that leftist Syriza, which fought against austerity when it was in opposition, was trying to play both sides in supporting the anti-austerity strike.

The party has said it will implement its side of the bargain with lenders, but has long maintained that the bailout terms are excessively harsh.

"We are implementing an agreement which includes [bailout] measures which are unfair," Ms Gerovasili said.

In the first major sign of disagreement since signing up to the new bailout accord, Greece and lenders are at odds over tightening the protection threshold for homeowners late with their mortgages.

At stake is the release of a €2bn tranche it needs to pay off state arrears and another €10bn for the country's four big banks. 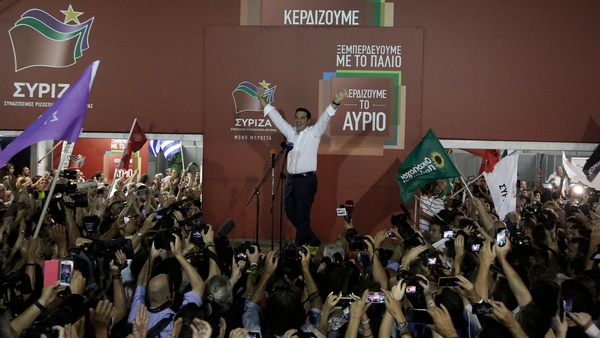