Portugal's left-wing opposition alliance toppled the country's centre-right minority government today in a parliamentary vote, less than two weeks after it was sworn in.

The minority government warned that a retreat on austerity could put Portugal on a similar path to Greece while the left celebrated the chance to raise incomes that were cut during the financial crisis, cut taxes and protect social benefits.

The prospect of a government backed by the far-left Communists and Left Bloc has rattled investors and prompted fears that a fragile economic recovery could be derailed in a country that exited an international bailout only last year.

"The taboo has ended, the wall has been broken," said Socialist leader Antonio Costa, who has engineered the move to oust the centre-right and team up with the far left.

"This is a new political framework, the old majority cannot pretend to be what it stopped being," he said.

Lawmakers forced the government's collapse, with 123 voting against its austerity programme in the 230-seat parliament. 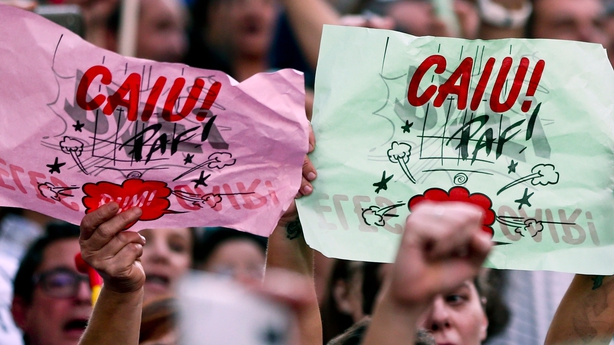 Several hundred government supporters gathered in front of parliament singing the national anthem and chanted "Up with (prime minister) Passos (Coelho)" while another group allied to the CGTP labour union rallied in support of the left.

Passos Coelho's centre-right coalition won most votes in an election last month and, in keeping with political convention, he was sworn back into office last week by the president.

But in an unexpected development, the three left-wing parties that amassed a majority in parliament, agreed after the election to put deep ideological differences behind them and group together to get rid of the centre-right.

They formalised their agreement to provide majority backing for a Socialist-led government today just before the vote.

Mr Coelho's government is the the shortest since Portugal returned to democracy in 1974.

Portugal's finance minister Maria Luis Albuquerque warned parliament that investor confidence was already waning, while failure to cut the budget deficit in line with Lisbon's EU commitments could provoke a new debt crisis and need for another bailout.

She said: "We don't need to imagine the consequences, it's enough to look at the recent experience of Greece and the cost of their attempt to end austerity ... More recession, more poverty, more joblessness and more dependence on European and IMF lenders."

The Socialists insist they would respect European Union budget rules as returning incomes to households should boost the economy. But many economists have questioned their plans.

A stock broker analyst said: "The market has been anticipating this and in the last few days has already shown concern.

"The next important moment is the president's decision."

The formation of a Socialist-led government depends on President Anibal Cavaco Silva.

He could ask Passos Coelho's government to remain in a caretaker capacity pending a new election or invite Mr Costa to form a government.

The process could be lengthy and deepen political concerns in a country which missed last month's deadline to present 2016 budget guidelines to Brussels.

"The probable consequences of this (leftist government) experiment are far from clear-cut, but they are likely to be mostly market-negative," Teneo Intelligence consultant’s vice-president, Antonio Barroso, said.