Taoiseach Enda Kenny has told the Confederation of British Industry conference in London that Ireland's financial recovery is good news for Britain.

He said Britain exports more to Ireland than it does to China, India and Brazil combined and stressed the strong social and financial links between the UK and Ireland.

He told the estimated 700 crowd - representing a wide range of British industry - that given the strength of the links it is not surprising that Ireland regards the prospect of the UK leaving the EU as a major strategic risk.

Mr Kenny said the full risks are unknown as much depends on what a British exit would look like, but said it is an outcome which Ireland does not want to see happen at all.

The Taoiseach said that while the Irish peoples' commitment to the EU is unqualified, the choice about whether to leave the EU or not belongs to the British people.

But he said as Britain's "friend, closest neighbour and only EU partner with whom it shares a land border" he felt it was right to share the perspective of the Government.

That view, he said, is that a Brexit is not in Ireland's economic interest.

He said research has shown that Northern Ireland could be one of the most adversely affected regions of the UK in the event of of a Brexit - something which he called "very worrying".

Mr Kenny said the EU has been an important enabler of peace in the North, providing almost €2.4bn in funding between 2007 and 2013 to help Northern Ireland overcome the challenges faced by a region emerging from conflict.

But he said he was not at the conference to say the EU was perfect and said he had seen how the EU could do better and shares the view that a critical view of what and how the EU functions is needed.

It is in all of our interests to make the Union function more effectively, he said.

Mr Kenny said he felt the EU and its institutions are now listening to those arguments.

A statement released afterwards by Mr Cameron's press office said: "The Taoiseach confirmed that it was in Ireland's interest and the EU's interest that Britain remains a member of the EU and confirmed that Ireland would be as supportive and as constructive as possible in these negotiations."

Earlier, Mr Cameron had told the CBI conference that the negotiation that he is engaged in on EU reform is vital for Britain's future.

He was heckled by Eurosceptics as he pledged to throw himself "headlong" into the campaign to keep Britain in the EU if his renegotiation of membership terms succeeds.

As he delivered a speech to the CBI conference, two protesters stood up and chanted "Voice of Brussels".

After telling them they were "making fools of yourselves", Mr Cameron insisted he had "no emotional attachment" to the institutions of the EU.

He said he wanted to "debunk" the idea that the UK could not survive outside the union.

Mr Cameron said future links to the EU represented a "huge question for our country in the year ahead and until we have that referendum".

"I am not satisfied with the status quo we have got in Europe," he said.

"Once I have achieved them, if I can achieve them, you will see me campaigning vigorously for Britain to stay in a reformed Europe.

"As I have said, if I cannot achieve them I rule nothing out."

Tomorrow Mr Cameron will publish a letter to European Commission President Donald Tusk setting out the basis of what Britain wants ahead of the UK's In/Out referendum on the EU before the end of 2017.

Burton - Fairness must be at heart of EU reform

Tanaiste and Labour leader Joan Burton said fairness must be at the heart of any European Union reform.

Speaking at a conference in Dublin, Ms Burton said EU support for the Northern Ireland peace process should not be underestimated.

"From the outset, our position has been clear: we want the UK to remain in the EU," Ms Burton said.

"We'll be as constructive and helpful as possible in the negotiations."

But while she said Ireland was broadly supportive of pragmatic proposals to improve how the EU works on competitiveness, national sovereignty, equality and migration and welfare, she warned that she was uneasy about Westminster's approach to welfare.

"Let me be frank, without wishing to overstep the mark: I believe that the UK Government has worked diligently on the employment front, to help create more jobs and get people back to work," Ms Burton said.

"But some of the measures already taken to reduce the UK welfare bill, and some of the proposals now on the table, do not rest easily with me.

"Those decisions are ultimately a matter for the UK, of course.

"But in terms of reform proposals tabled at EU level, fairness must be front and centre."

A leading Scottish politician said if Britain was to vote to leave the EU, then Scotland would have to look very closely at a second referendum.

Cabinet secretary for Culture, Europe and External Affairs Fiona Hyslop also said if Britain voted to leave then there would be an EU border on the island of Ireland, which would have very serious implications.

She said she was not sure if people in Britain were aware of such an implication.

Ms Hyslop also said it was very important that a positive case was put forward by Mr Cameron.

UKip leader Nigel Farage said there would be absolutely no threat to trade between Britain and Ireland if Britain voted to leave the EU.

He said Switzerland had more global free trade deals than the EU.

Mr Farage said it was in the EU's interest to have a free trade agreement with Britain and Britain could take back control of its fisheries if it voted to leave.

He also said trade would be unaffected between Northern Ireland and the Republic of Ireland if Britain left the EU.

Mr Farage said Ireland was "bullied into submission" to vote Yes to the Nice treaty. 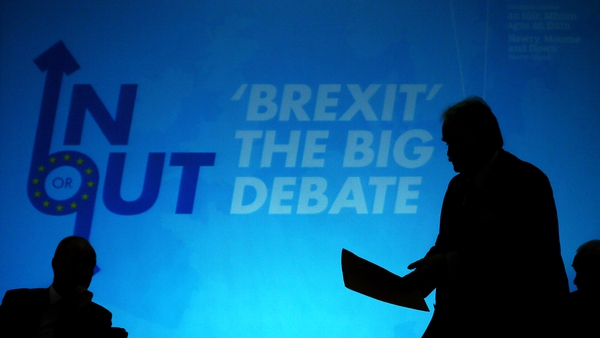