Russia's Air Force has carried out more than 60 flights in Syria in the past 72 hours, significantly reducing the military potential of terrorists there, a senior official in the Russian army told Russian news agencies on Saturday.

"The strikes were carried out around the clock from the Hmeymim air base along the whole depth of the territory of Syria," Mr Kartapolov said, according to RIA news agency.

He said Russia had warned the United States ahead of launching its air strikes and recommended that the US stop its own flights in areas where Russia's air force was operating.

"The Americans told us during discussions, that no one apart from terrorists were in that region," Mr Kartapolov said, referring to the area where Russia's Air Force was active, according to Interfax.

He also said that Russia intends to increase its strikes on Syria in the coming days.

Earlier, the Russian defency ministry said air strikes destroyed an IS command post near Raqa, among other targets, as Moscow pressed on with its bombing campaign in Syria.

"Over the past 24 hours SU-34 and SU-24M jets of the Russian airborne formation in Syria made more than 20 sorties over nine Islamic State infrastructure facilities," the defence ministry said.

SU-34 fighters jet dropped a concrete busting BETAB-500 bomb on a command post in the area of IS stronghold Raqa, releasing video of the strike.

"A powerful explosion in the bunker means that it was also used by terrorists to store a large amount of ammunition," the defence ministry said in a statement.

SU-24 bombers also destroyed a warehouse that stored ammunition in the mountains near the city of Jisr al-Shughur in Idlib province in northwestern Syria. 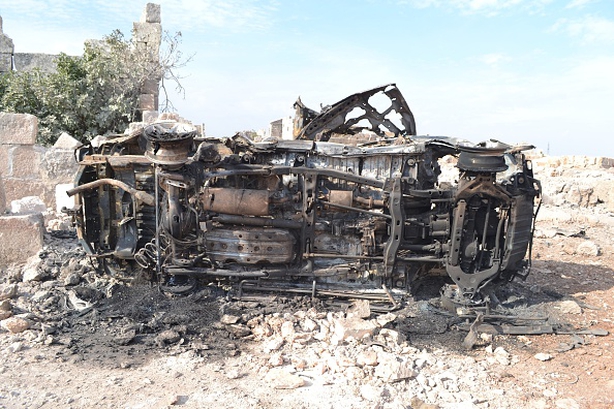 The warehouse was completely destroyed, the ministry said, referring to a "huge cloud of smoke and crater" following the strikes.

SU-34 fighter jets also targeted a training camp belonging to the Islamic State group near the town of Maaret al-Numan in Idlib province and destroyed ammunition and equipment, the ministry said.

Russian unmanned aerial vehicles continue to monitor the areas under control of the Islamic State group, the statement said.

"All the targets get destroyed quickly, irrespective of weather conditions and time of the day."

Russia launched air strikes in Syria on Wednesday, its first major military engagement outside the former Soviet Union since the occupation of Afghanistan in 1979.

Washington has accused Russia of striking moderate rebels fighting against the embattled Syrian president under cover of a claimed assault on IS militants.

US President Barack Obama warned yesterday that Moscow's aggressive military campaign in Syria was a "recipe for disaster."