Spain's prime minister has warned of the risks surrounding Catalonia's secessionist campaign, saying there were serious questions over pensions and bank deposits, and the right to Spanish citizenship could be threatened.

His comments came just five days ahead of an election in the wealthy northeastern region framed as an indirect vote on independence.

Nationalist leaders in Catalonia have vowed to declare independence within a year-and-a-half if they win a majority of seats in the regional assembly in the polls.

"Some say that Catalan independence is the panacea that cures all ills, that it will generate jobs. All of that is not true," Prime Minister Mariano Rajoy said during an interview with radio Onda Cero.

The prime minister also said he "did not know" if Catalans would be able to hold on to their Spanish citizenship if Catalonia became independent.

Mr Rajoy said any push by Catalan nationalists to break away from Spain after the elections "would have no legal value, we would obviously go to the Constitutional Court".

He added: "What Spain is is up to all Spaniards to decide, not just some."

If separatist parties fail to obtain an absolute majority in the Catalan parliament, Mr Rajoy said his conservative Popular Party was open to forming an alliance with other parties that want the region to stay in Spain.

"If the construction of an alternative to those who want to break up Spain is possible, that would be reasonable," he said.

Catalonia, a region of 7.5 million people which accounts for a fifth of Spain's economic output, has its own language, which was suppressed during General Francisco Franco 1939-75 dictatorship.

The region's independence drive has intensified over the recent years of economic crisis.

Catalans complain about how much of their tax money is redistributed to the rest of Spain. 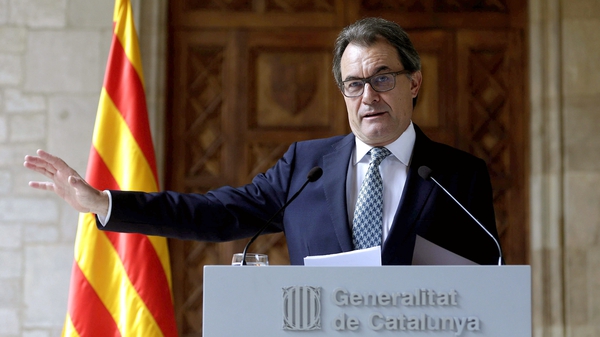 Catalonia calls off referendum for independence