The Italian coastguard has said nearly 4,700 migrants were rescued from boats in the Mediterranean yesterday, releasing video footage of the rescue operations at sea.

One woman was found dead in an inflatable boat, Italy’s coastguard said in a statement. The migrants were being directed to ports in Italy to disembark. 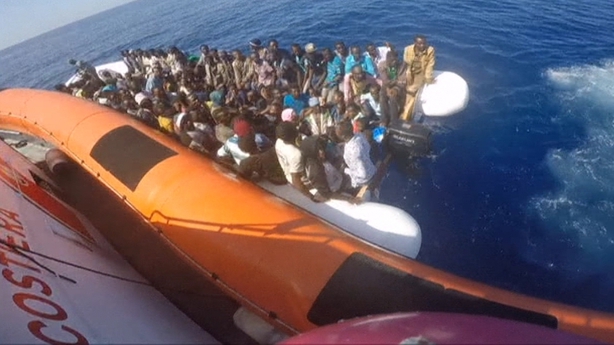 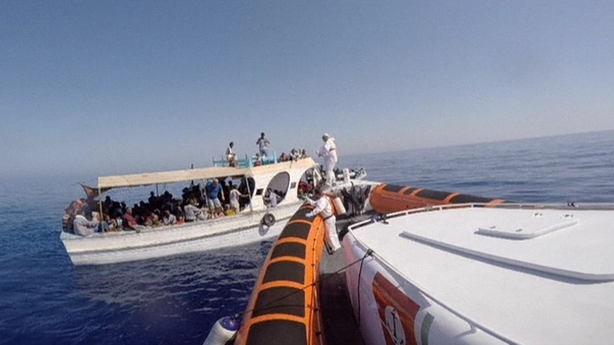 The rescue vessels used during the operation were from the Italian coastguard and navy, humanitarian agency Doctors Without Borders, the Malta-based Migrant Offshore Aid Station, a merchant boat, a Croatian vessel under the European Union’s Triton rescue mission and naval ships from Germany and Britain under the EU’s EUNAVFOR Med mission.

It comes as some 26 migrants are feared missing after a dinghy carrying them sank off the Greek island of Lesbos, the coastguard said.

Their nationalities were not immediately known. A search and rescue operation was under way and 20 other people were pulled from the water, a coastguard spokeswoman said.

"They (the migrants) told rescuers there were 46 people in the inflatable dinghy in total," she said.

125 people were rescued by Irish navy vessel, LÉ Niamh, today at around 2pm off the coast of Tripoli. The vessel will now travel to a port in Italy.

Meanwhile, at least 13 migrants have died off the coast of Turkey  after the inflatable dinghy carrying them to Greece collided with a ferry, Turkish media reported.

Four children were among the victims of the crash involving a boat carrying 46 migrants from the northwestern Turkish port of Canakkale to the Greek island of Lesbos, Dogan news agency reported. 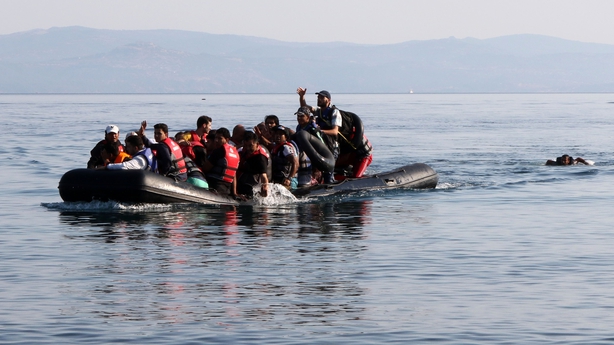 Hundreds of thousands of refugees, mainly from Syria, have attempted the short crossing from Turkey this year, mainly in flimsy and overcrowded inflatable boats.

A girl believed to be five years died yesterday and 13 others were feared lost overboard after their boat sank off the island of Lesbos, a favoured entry point on a route that takes the migrants through the Balkans towards northern Europe.

Some 15 babies and children were among 34 who died a week ago when their boat capsized off the small island of Farmakonisi.

Mr Cerar's comment came while visiting a refugee registration centre at the town of Brezice near the Croatian border, where incoming migrants are processed before being sent to reception centres elsewhere in the country.

"It is our duty, according to agreements, to register people who arrived, check their identities and establish whether they can enter the European Union or not. If the situation grows too big and exceeds the capabilities of our policemen and other services, the volume of these checks might be reduced.

According to Slovenian police, some 1,500 migrants crossed into Slovenia from Croatia on Saturday, while hundreds more were stuck at a nearby border crossing with Croatia, having exited Croatian territory but blocked from entering Slovenia by cordons of Slovenian riot police who only let through a limited number of people.

Croatia, which itself received more than 20,000 migrants on three days after Hungary closed its border with Serbia, said it couldn't cope with the influx of people and would let migrants pass through into Slovenia and Hungary on their way to Germany and other countries in western Europe.

It comes as Turkish Prime Minister Ahmet Davutoglu met representatives of Syrian refugees and members of the Syrian opposition late last night and asked them to end the protest near Turkey's land border with Greece in the western city of Edirne and return to their daily routine. 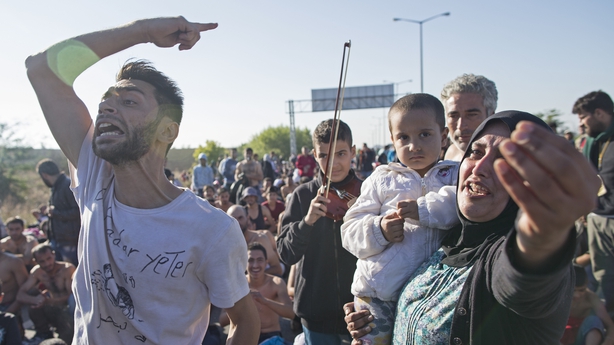 Thousands of migrants were waiting at an outdoor sports arena after security forces halted their advance towards Turkey's land border with Greece on Friday from a makeshift roadside camp where they had sheltered for three days.

Hundreds of others were camping at a bus terminal in Istanbul hoping to travel to Edirne to join the others.

Three refugees went to the Turkish capital Ankara and met Mr Davutoglu. After listening to the representatives of refugees, Mr Davutoglu said he would write a personal letter to European leaders.

"After this meeting, I will write a personal letter to the heads of governments (of European countries) and I will tell them of your problems and I will make an international call for Syrian migrants," he said.

The prime minister asked the migrants to end the protest and return to their daily routine.

Some 100 migrants waiting on the roads for permission to pass through were moved to an outdoor sports arena yesterday where thousands of migrants were camping.

They had been in a stand-off with police, some in riot gear, since Tuesday when they attempted to walk from Istanbul to the Pazarkule border crossing near the city of Edirne.

Hundreds of thousands have made the perilous journey by boat to Greek islands off Turkey, but a spiralling death toll has seen more people make for its land borders.

On Thursday a spokesman for the caretaker Greek government said it was preparing for a possible new wave of migrants crossing the Evros river that divides Greece from Turkey.

Turkey is sheltering more than two million Syrians and Iraqis, the largest refugee population in the world.

But a lack of jobs and hopes of a better life in Europe have led to an ever-growing number attempting to cross into neighbouring countries.

With Ankara struggling to manage the humanitarian fallout and frustrated at what it sees as lack of support from European partners, there are fears officials could begin turning a blind eye to those trying to leave Turkey.

Migrants have recently turned to Turkey's land borders due to spiralling death tolls on sea routes to Europe.

Police in Germany have said there had been an arson attack on a planned accommodation centre for migrants in the southwestern state of Baden-Wuerttemberg, the latest sign of tension as migrants flow to the country.

Police in the city of Heilbronn said no-one had been in the sports hall in nearby Wertheim at the time of the attack and it was not possible to enter the building because of fire damage.

The attack came as a senior member of parliament in Chancellor Angela Merkel's conservative sister party, the Christian Social Union, spoke out in favour of tighter rules on granting asylum.

"Those who are not in danger should leave Germany as quickly as possible," Gerda Hasselfeldt told the Welt newspaper.

"We have to set clear priorities. We need our energy and resources for those who are fleeing war and persecution."

The comments came as Hungary and Croatia traded threats as thousands of migrants poured over their borders, deepening the disarray in Europe over how to handle the crisis.

A proposal being argued over ahead of a meeting of European Union interior ministers on Tuesday would, if agreed, relocate 120,000 asylum seekers over the next two years around the whole bloc.

The number of migrants entering Germany, which recently reimposed border controls, was lower on Saturday, with 1,710 people registered, than on Friday, when the number was 1,985, police said.