The Hungarian army has started military exercises to prepare its soldiers for a role in guarding the country's southern border, state news agency MTI cited Chief of Staff General Tibor Benko as saying.

Hungary is planning to send soldiers to help police patrol the border where thousands of refugees and migrants are arriving from Serbia every day.

Prime Minister Viktor Orban has said passing legislation to deploy the army would not be possible before 20 September.

In his first State of the Union address to the European Parliament, Mr Juncker outlined an emergency plan for the compulsory distribution of 160,000 refugees among the 28 EU member states.

He also promised a permanent asylum mechanism to cope with future crises.

He urged Europeans to welcome the refugees and not take fright.

Europe was a continent where almost everyone had been a refugee at some time or another, and it was rich enough to cope with a challenge far smaller than the one facing Syria's neighbours - Turkey, Jordan and Lebanon.

"It is Europe today that represents a place of hope. This is something to be proud of and not something to fear," the former Luxembourg prime minister said in a 80-minute speech.

"The Europe I want to live in is illustrated by those who want to help," he added, denouncing calls to discriminate among refugees according to religion. 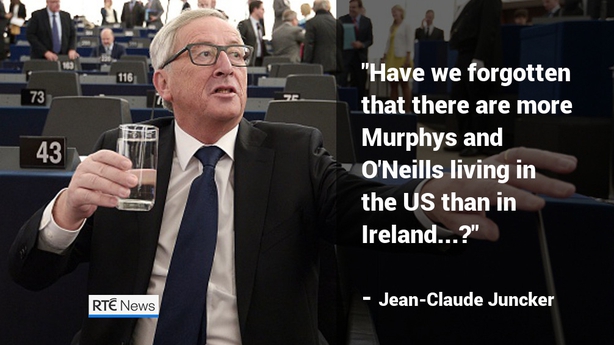 He said: "We Europeans should know and never forget why the right to asylum is one of the fundamental, most important rights. We should not forget that."

He said: "It is true that Europe cannot house all the misery in the world. But we have to put it into perspective.

"This still represents just 0.11% of EU population. In Lebanon refugees represent 25% of population which has just 1/5 of the wealth of the EU. Who are we to never make such comparisons?"

"As long as there is war in Syria, the refugee crisis will not simply go away," Mr Juncker said.

Listing the problem top among a written list of priorities, before the economy, Ukraine, climate change and a looming vote on the UK’s membership of the bloc, he said the crisis was caused by "war, terror and instability in our neighbourhood".

Mr Juncker acknowledged the European Union was in a bad state, saying "it is lacking Europe and it is lacking Union".

He confirmed plans for a common EU list of "safe countries of origins" whose citizens would be subject to fast-track deportations if they breached EU immigration laws.

He also urged EU member states to allow refugees to work from day one while their asylum applications are processed. 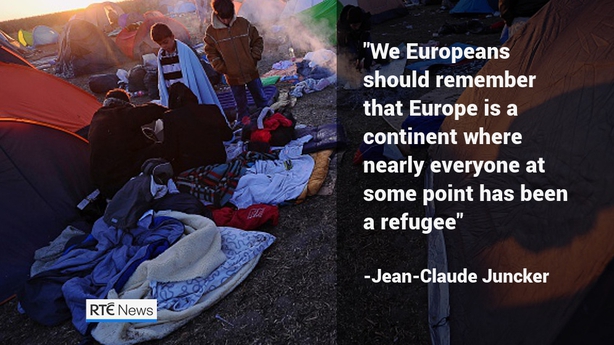 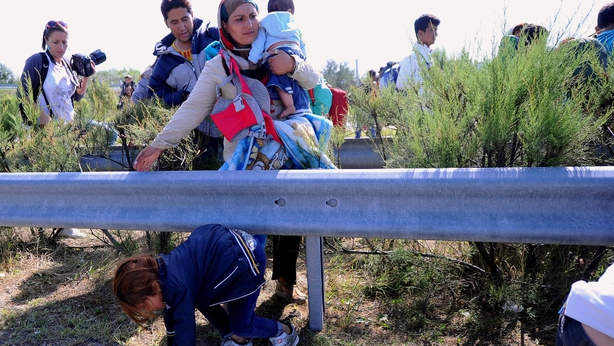 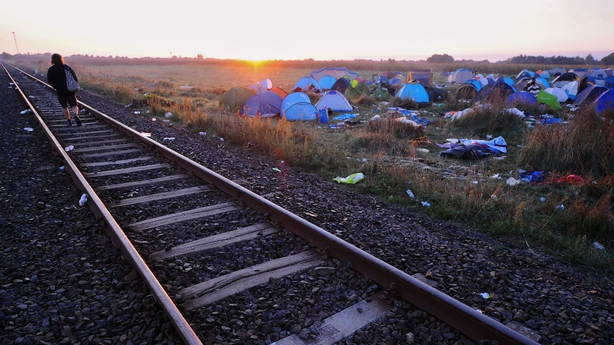 Mr Juncker, whose proposals face opposition from several governments whose interior ministers will meet on Monday, pledged to improve the management of the bloc's external frontiers, bolster its Frontex border agency and take "steps toward the creation of European coastguard and border guard systems".

He also proposed a "more effective approach to return" -addressing complaints that too many people not entitled to asylum enter the Union illegally and remain there often despite legal proceedings that conclude they should return home.

Mr Juncker called for efforts to strengthen the EU's common asylum system and a scheduled review of the so-called Dublin system, which stipulates that people may request asylum only in the state where they first enter the EU, straining resources in frontline countries in the south and east.

Answering criticism from refugee and migration agencies, he said the EU would "develop safe legal avenues for those in need of protection" - reducing the temptation to risk dangerous sea crossings and smuggling networks - as well as a permanent scheme to resettle refugees from other regions and better protection for refugees living in regions neighbouring Europe.

He also renewed a proposal to review the system by which workers can apply to migrate to the EU, addressing concerns on an ageing continent that it needs to attract new people.

The detailed proposals may provoke new wrangling among EU states and between national leaders and the EU executive.

And he took a dig at Hungary's building of a frontier fence by saying desperate families fleeing Syria would cross any barrier and brave many dangers to escape their homeland. 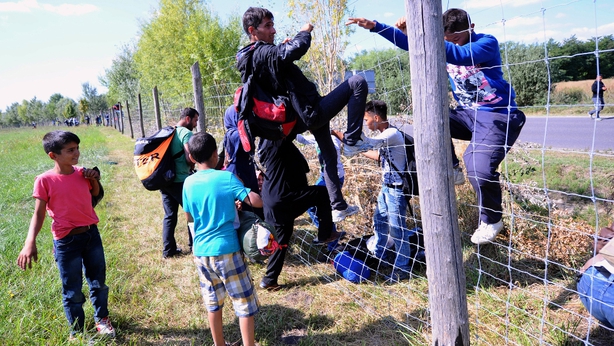 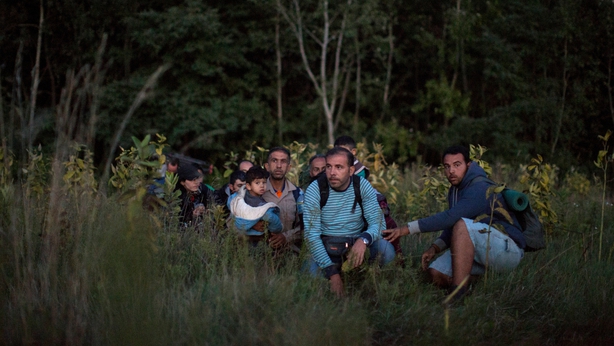 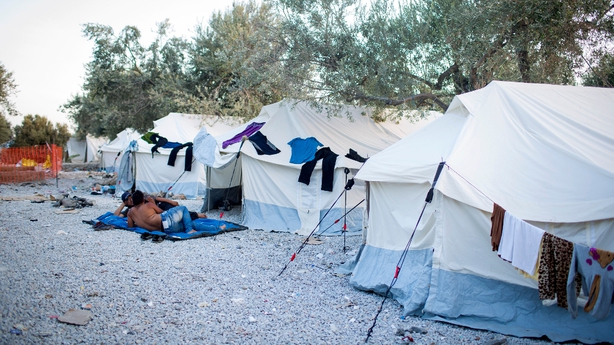 The mounting scale of the human calamity on the bloc's frontiers - and fears that discord might do wider damage to shared interests like freedom of travel across Europe's internal borders - has kindled some willingness to compromise after an earlier Juncker plan in May provoked bitter recrimination.

"This time, the Commission seems to be proposing a more comprehensive approach, also addressing the need to control the external frontiers better," said one EU diplomat whose government was among those in the east who argued that their society, unused to immigration, could not take in large numbers.

"There is still a lot to negotiate. There is a lot we cannot accept. But the debate is now a lot less emotional."

While Hungarian Prime Minister Viktor Orban remains vocally opposed to relocation quotas, his country will now benefit from the scheme, having taken in tens of thousands.

And Polish Prime Minister Ewa Kopacz conceded yesterday that Warsaw could take in more than the 2,000 people it has said.

Under Mr Juncker's plan, EU sources say Poland would be asked to take in nearly 12,000.

EU officials have said countries could also be offered the chance to contribute financially rather than take in migrants.

Ms Robinson, who served as the UN's High Commissioner for Human Rights from 1997 to 2002, told RTÉ’s Six One News that Ireland has to opt in, and generously.

She said the refugee situation is not going to disappear in the short-term and commended Germany for taking great leadership.

She said refugees need to be dealt with humanely and with dignity, but said all migrants have human rights, including economic migrants.

Ms Robinson said she is conscious of the acute social housing and homelessness issue in Ireland, but said that migrants can add to the economy, if they are entitled to work. 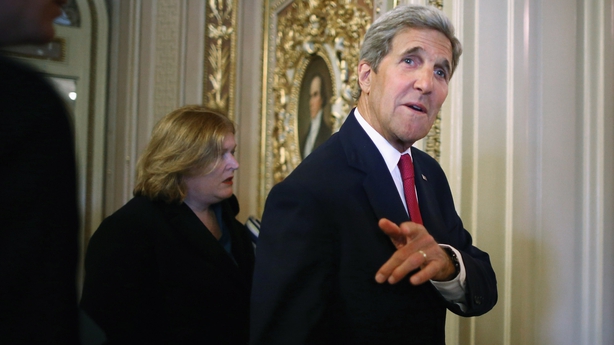 US Secretary of State John Kerry has said the United States is studying how it can resettle more refugees fleeing the conflict in Syria.

After meeting US lawmakers Mr Kerry said: "I just met with members this morning, and we are committed to increasing the number that we will take.

"And we are looking hard at the number that we can specifically manage with respect to the crisis in Syria and Europe."