Northern Ireland First Minister and DUP leader Peter Robinson has proposed the establishment of negotiations to deal with problems that are threatening the future of power-sharing at Stormont.

Mr Robinson will discuss the proposal with the British Prime Minister, David Cameron, in London tomorrow (Tuesday) and he will also consult with other parties at Stormont and with the Irish government.

Speaking to RTÉ News he said he wanted to see an end to all paramilitaries, including the IRA and this issue would have to be addressed in any new negotiations.

The Ulster Unionist Party will formally withdraw its minister, Danny Kennedy, from participation in the power-sharing executive.

Earlier, Mr Robinson called the decision by the Ulster Unionist Party to leave the Northern Ireland Executive irresponsible and illogical.

Mr Robinson said he intends to stand and fight for democratic principles.

Mr Robinson, who has been on holiday, said the UUP's decision was based on "political expediency" rather than principle and walking away should be a last resort.

UUP leader Mike Nesbitt said: "It is extraordinary that it has taken until the last day of August for Peter Robinson to comment on the latest IRA murder.

"It is equally remarkable that he cannot agree with me that enough is enough and take a principled stand."

In an article in the Belfast Telegraph, Mr Robinson also criticised Sinn Féin saying those who are in government cannot be involved with those who engage in criminal or paramilitary activity.

On Saturday, senior UUP members voted to withdraw from the power-sharing government over claims the Provisional IRA still exists.

Mr Nesbitt said the revelations about the IRA have shattered trust in Sinn Féin and the UUP can no longer work in coalition with it.

Danny Kennedy, the UUP's one minister in a five-party administration comprising 13 ministers and two junior ministers, will formally resign this week.

The UUP's decision is not enough to collapse the executive but is does throw its future into doubt and brings pressure on the DUP to follow suit.

So far the DUP has insisted Sinn Féin should be the party leaving the executive.

The controversy began after PSNI Chief Constable George Hamilton said the PIRA still exists and some members were involved in the murder earlier this month of Kevin McGuigan, 53, in co-operation with a group styling itself Action Against Drugs.

Mr Hamilton has, however, said the PIRA is not engaged in terrorism and there is no evidence the murder was sanctioned by the IRA leadership.

Yesterday, Minister for Foreign Affairs Charlie Flanagan said its important every effort is made by political leaders to retain the political institutions in Northern Ireland.

Sinn Féin's Mary Lou McDonald accused the leaders of Fianna Fáil and Labour of "playing fast and loose" with the Institutions in Northern Ireland making what she described as one blanket accusation after another with nothing to back it up and with no real view to their consequence.

She said  there has to be a reality check around the expectation that Sinn Féin is to answer for every misdemeanour or criminal act.

Ms McDonald said her party's commitment to policing North and South is "absolute".

She said those who killed Mr McGuigan must be pursued, there is no where to hide.

Ms McDonald said Mr Flanagan need be in no doubt that Sinn Féin will do everything it can to support the peace process. 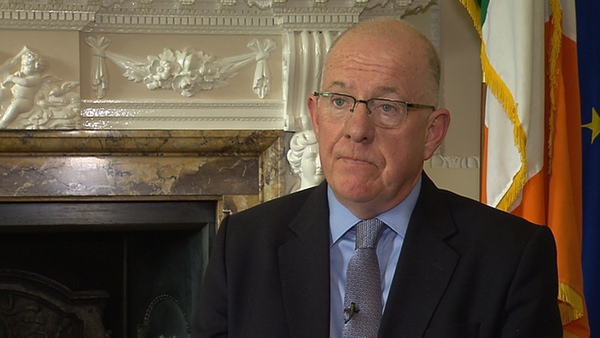 Every effort must be made to retain NI political institutions - Flanagan