US Republican presidential candidate Donald Trump will end the J1 Visa programme if elected according to a policy paper on immigration published on his website.

He said the scheme will be "terminated and replaced with a resume bank for inner city youth provided to all corporate subscribers" to the J1 visa programme.

Mr Trump has made immigration a cornerstone of his election platform and said millions of undocumented immigrants in the US must leave.

He has also vowed to rescind President Barack Obama’s executive orders that have slowed deportations of illegal immigrants and to end birthright citizenship, which allows anyone born on US soil to obtain US citizenship.

However, he was vague on details on how to deal with undocumented immigrants and would not confirm where those with nowhere to go would be sent.

Mr Trump, himself the son and grandson of immigrants,  has recently made headlines calling many Mexicans "rapists" and criminals, demanding that Mexico pay for a wall between it and the US, and then refusing to retract his remarks.

He has extended his lead in the 2016 Republican nomination race leading with 24% support, well ahead of second-place Jeb Bush with 13%, according to a new national CNN/ORC poll.

Despite a broad field of 17 Republican candidates, Mr Trump's backing is five points higher than in the same poll three weeks ago, prior to the party's much-watched first major debate earlier this month.

Retired neurosurgeon Ben Carson is third, with 9%, Wisconsin Governor Scott Walker and Senator Marco Rubio of Florida are tied at fourth with 8%, and Kentucky's Senator Rand Paul is in sixth place with 6%.

The poll is the latest of several surveys showing the world's most famous landlord is ruling the roost in his party's presidential race.

It also shows respondents trusting him over all other Republican candidates when it comes to handling the economy, immigration, social issues like abortion, and battling Islamic State extremists. 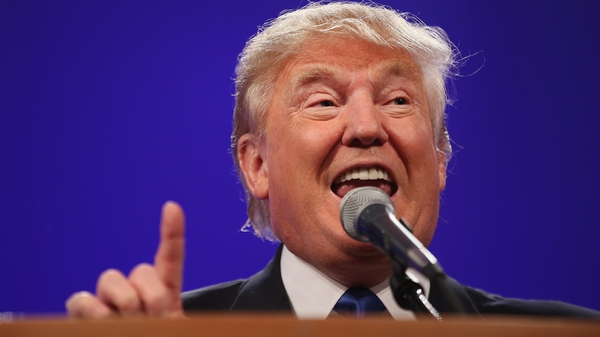