Researchers at Trinity College Dublin are working towards developing a simple finger prick blood test for concussion, which could be used to quickly diagnose the condition among players of rugby and other impact sports.

The test will use biomarkers in the blood, which it is thought are present after a concussion is sustained, and which could be used as a measure of brain injury.

The university is working with Leinster Rugby to develop the test.

Leinster Rugby's physiotherapists have been taking blood samples from professional players participating in the study during periods when they are contact-free and also over a period of three consecutive games.

The samples have been analysed in a laboratory specialising in diabetes in Denmark, and the before-and-after contact results were compared to see if differences in the blood could be found.

Dr Fiona Wilson, Assistant Professor in Physiotherapy at TCD, said significant progress has been made in identifying a blood test that will add to the battery of tests already available to clinicians.

They have to decide whether to remove players from the field due to concussion and subsequently assess them to decide when they can safely resume playing again.

A second project under way at the university is marrying research into what happens to pedestrians involved in car crashes with studies into movement patterns in sports collisions.

Using the models they can then create accurate reconstructions of players movement patterns in specific collisions.

Putting the information together with the results of previous research on what happens to the human body during pedestrian collisions, the team is hoping to be able to estimate whether a particular player may have been injured or not during a rugby impact.

The team hopes that the research may lead to the development of a system that could analyse video footage of collisions captured from multiple angles and decide whether the player involved is at risk of concussion. 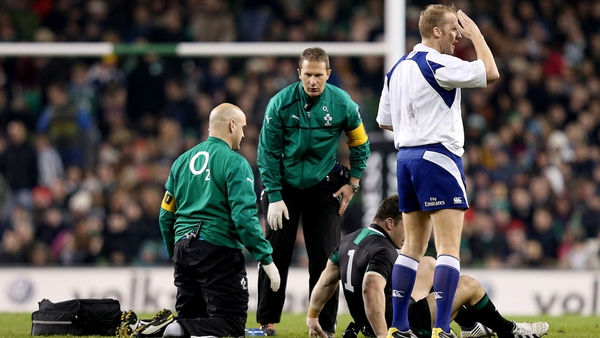