Bells tolled and thousands bowed their heads in prayer in Hiroshima at ceremonies marking the 70th anniversary of the world's first atomic bombing.

As the ceremonies took place, survivors warned about Japan's moves away from its pacifist constitution.

Prime Minister Shinzo Abe and his government are pushing security bills through parliament that could send Japanese troops into conflict for the first time since World War II, sparking protests around the country.

Many with memories of the war and its aftermath are scathing about Mr Abe's steps away from Japan's pacifist constitution in pursuit of a more robust security stance.

The prime minister repeated his view that the legislation was essential to ensure Japan's safety.

At 8.15am local time, the exact time the bomb exploded on 6 August 1945, the crowd stood for a moment of silence in the heavy summer heat as the Peace Bell rang and hundreds of doves were released into the sky.

Hiroshima Mayor Kazumi Matsui urged that nuclear weapons be abolished and demanded the creation of security systems that do not rely on military might.

"Working with patience and perseverance to achieve these systems will be vital, and will require that we promote throughout the world the path to true peace revealed by the pacifism of the Japanese constitution," he said in a speech. 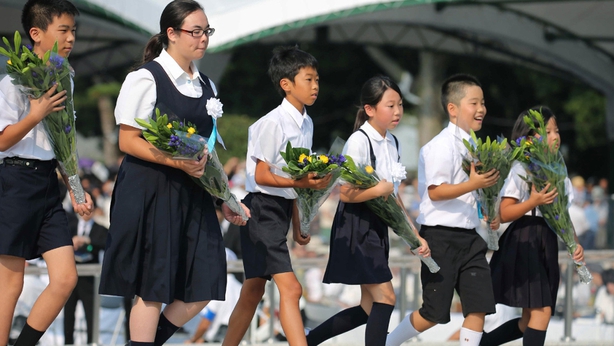 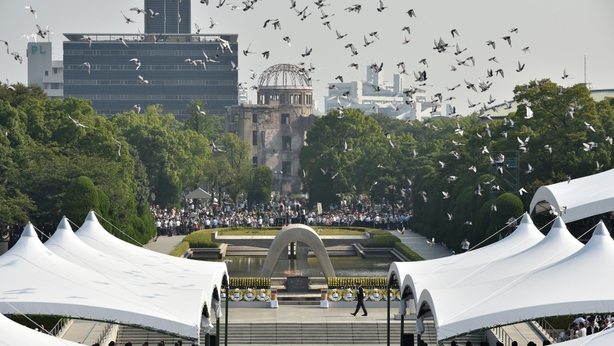 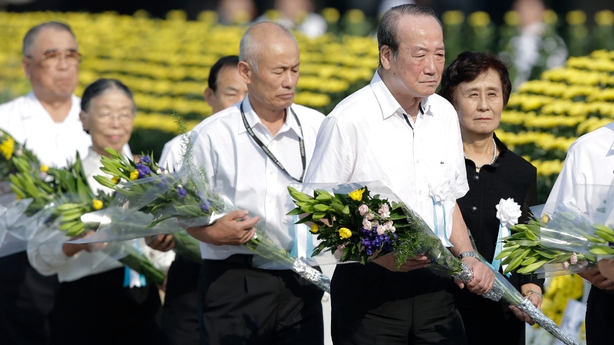 Many of those gathered for the ceremony renewed their calls for peace.

"My grandfather died here at that time and I keep wondering what he felt then," said Tomiyo Sota. "He was still 21 years old and it pains me to think he died so young."

Marking the 70th anniversary of atomic bomb attacks over Hiroshima & Nagasaki, @rtenews has this explainer of events http://t.co/PFC776OLHr

US Secretary of State John Kerry said the anniversary underscored the importance of a deal reached on Iran's nuclear programme last month.

Asked at the start of a meeting with Japanese Foreign Minister Fumio Kishida on the sidelines of a regional meeting in Malaysia whether he had any thoughts about the significance of the anniversary, Kerry replied: "It is impossible not to have thoughts about it.

"I watched the ceremony ... Needless to say, it is a very, very powerful reminder of not just the impact of war lasting today on people and countries but it also underscores the importance of the agreement we have reached with Iran to reduce the possibility of more nuclear weapons."

Mr Kerry said the anniversary also emphasised the importance of work by the United States with other countries, particularly Russia, to reduce the number of existing nuclear weapons.

Under a 14 July pact with Iran, the United States and world powers agreed to lift sanctions in return for curbs on a nuclear programme the West suspects was aimed at developing the means to build an atomic bomb.