US Secretary of State John Kerry has travelled to Egypt to re-launch a strategic partnership with Washington's longtime ally, at the start of a regional mini-tour.

He is also due in Qatar tomorrow to meet his Arab counterparts in the Gulf to try to ease their concerns over the Iran nuclear deal.

Mr Kerry's trip, which ends on 8 August, will not include Israel, one of Washington's closest allies and a fierce critic of the 14 July deal between the Islamic republic and world powers.

During his stop in Cairo, Mr Kerry is to meet with his counterpart Sameh Shoukri for a "strategic dialogue" between the allies, which have had a tumultuous relationship since Egypt's 2011 revolution.

In late March, the US lifted its freeze on annual military aid of $1.3bn to Cairo.

But Washington kept up public condemnation of the brutal repression by President Abdel Fattah al-Sisi's regime of supporters of his ousted Islamist predecessor, Mohamed Morsi.

The "dialogue" between the two officials is the first since 2009, and comes in the wake of an announcement this week that Washington began the delivery of eight F-16 fighter jets to Egypt.

"We'll certainly be discussing the issue of the political environment, human rights issues while the Secretary is in Cairo. That is an important part of our regular dialogue," a US State Department official said.

Mr Kerry will travel on to Doha to meet his counterparts from the six Gulf Cooperation Council (GCC) member states.

The main purpose of that meeting will be to allay fears the Arab monarchies of the Gulf have about Shiite Iran, following the nuclear deal signed in Vienna.

Many Gulf states have said they are concerned about Iran's ambitions in the region following the pact with the US and five other world powers - Britain, China, France, Germany and Russia.

An official in Washington said Mr Kerry and GCC foreign ministers will also discuss the conflicts in Syria and Yemen.

On the sidelines of the GCC meetings, Mr Kerry is set to meet Russian Foreign Minister Sergei Lavrov on a number of issues, including the crisis in Syria, the State Department said.

After Doha, the US Secretary of State will leave for southeast Asia, where he will visit Singapore, Malaysia and Vietnam. 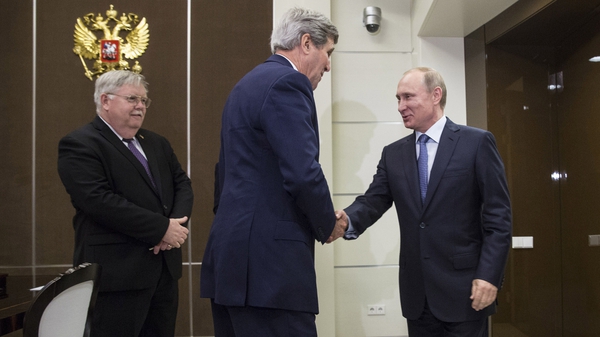 Kerry urges all sides in Ukrainian conflict to maintain ceasefire