A rally organised by the Anti-Racism Network took place at the Department of Justice today, calling for the immediate release of the Afghan man, who was assaulted and injured earlier this week at a Cloverhill prison.

21-year-old Walli Ullah Safi was discovered on the roadside near Naas, earlier this month, and was then remanded in custody.

Organisers say he should not be in prison but instead in the asylum seeker process. 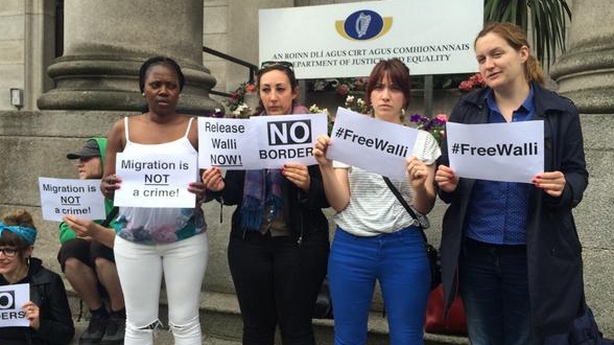 It is believed Walli Ullah Safi had travelled for three months from Afghanistan, and arrived in Ireland as a stowaway on a lorry.

He was then remanded to Cloverhill prison after being picked up gardaí.

It emerged that he had been assaulted by prisoners there during Wednesday's disturbances and it is believed he suffered a broken arm and other injuries.

A spokesperson for the Department of Justice, said there are robust procedures in place for someone to apply for asylum, including from prison.

It is understood an application for asylum has been made and that the UNHCR will also get involved.

The Prison Service said Mr Safi is now in a safe and secure area of the prison.