North Korea has said it has no interest in engaging in nuclear dialogue following the successful conclusion of talks involving Iran.

A North Korea spokesperson insisted any comparison with Iran was beyond logical comparison as it was already a nuclear weapons state.

A week after the historic deal that cleared a path to lift sanctions crippling Iran's economy in exchange for limits on its nuclear programme, North Korea rejected any suggestion that it might follow suit.

North Korea "is not interested at all in the dialogue to discuss the issue of making it freeze or dismantle its nukes unilaterally," a foreign ministry spokesman said.

"It is illogical to compare Iran's nuclear agreement with the situation of (North Korea) which is exposed to constant provocative military hostile acts and the biggest nuclear threat of the US," the spokesman told the North's official KCNA news agency.

Both Iran and North Korea, allies since Iran's 1979 Islamic revolution, have been subjected to tough economic sanctions over their controversial nuclear programmes.

The deal reached with Iran was touted by some as a possible blueprint for eventual negotiations with North Korea, with US Undersecretary of State Wendy Sherman saying she hoped it would give North Korea "second thoughts" about the nuclear path it was pursuing.

But the North's foreign ministry spokesman said the two situations were "quite different".

The six-nation talks to curb its nuclear ambitions - involving both Koreas, the US, China, Russia and Japan - have been in limbo since North Korea stormed out in 2009.

There has been growing pressure for the international community to try a new approach with North Korea, which has pushed ahead with its nuclear and missile programmes despite multi-layered UN sanctions and diplomatic isolation.

The US and South Korea insist that the North must show a tangible commitment to denuclearisation before significant talks can resume.

A recent report by US researchers warned that North Korea was poised to expand its nuclear programme over the next five years and, in a worst-case scenario, could possess 100 atomic arms by 2020.

"Nuclear deterrence... is not a plaything to be put on the negotiating table," the foreign ministry spokesman said.

US Secretary of State John Kerry has said a speech made by Iranian Supreme Leader Ali Khamenei vowing to defy US politics in the Middle East was "very disturbing".

Mr Kerry said he did not know how to interpret the speech other than at face value.

Ayatollah Khamenei told supporters on Saturday that US policies in the region were "180 degrees" opposed to Iran's, at a speech in a Tehran mosque punctuated by chants of "Death to America" and "Death to Israel".

"Even after this deal our policy towards the arrogant US will not change," he said. 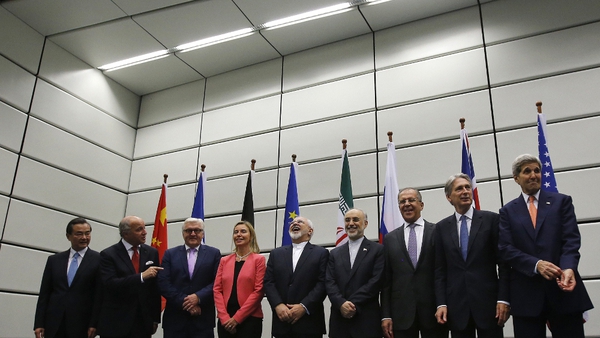