A 94-year-old former Nazi SS officer who worked as a bookkeeper at the Auschwitz death camp has been convicted of being an accessory to the murder of 300,000 people and sentenced to four years in prison, in what could be one of the last big Holocaust trials.

Oskar Groening did not kill anyone himself while working at the notorious camp in Nazi-occupied Poland, but prosecutors argued that by sorting the bank notes from trainloads of arriving Jews he helped support the regime responsible for mass murder.

Groening, who has been on trial since April, has admitted moral guilt but said it was up to the court to decide whether he was legally guilty.

He said earlier this month that he could only ask God to forgive him as he was not entitled to ask this of victims of the Holocaust.

The sentence was longer than the three-and-a-half years prosecutors had demanded in the court in the northern city of Lueneburg, which has been hearing the case since April.

Groening had yesterday seized a last opportunity to address the judges and said he was "very sorry" for his time stationed at the concentration camp, telling them that "no one should have taken part in Auschwitz".

"I know that. I sincerely regret not having lived up to this realisation earlier and more consistently. I am very sorry," he said, his voice wavering.

A group of Holocaust survivors said in a statement released after the verdict "we welcome the conviction of Oskar Groening", calling it a "very late step toward justice".

The trial went to the heart of the question of whether people who were small cogs in the Nazi machinery, but did not actively participate in the killing of six million Jews during the Holocaust, were guilty of crimes.

Until recently, the answer from the German justice system was no. 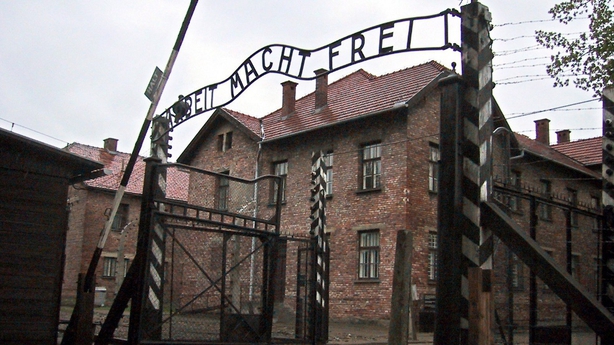 During his time at Auschwitz, Groening's job was to collect the belongings of the deportees after they arrived at the camp by train and had been put through a selection process that resulted in many being sent directly to the gas chambers.

Groening was 21 and by his own admission an enthusiastic Nazi when he was sent to work at the camp in 1942.

There, he worked inspected people's luggage, removing and counting any bank notes that were inside and sending them on to SS offices in Berlin, where they helped to fund the Nazi war effort.

The charges against him related to the period between May and July 1944 when 137 trains carrying roughly 425,000 Jews from Hungary arrived in Auschwitz.

At least 300,000 of them were sent straight to the gas chambers, the indictment says.

Many Germans are keen to draw a line under the Holocaust and seal the post-war democratic identity of their nation.

Some find distasteful the pursuit of old men, often in poor health, for crimes committed nearly 70 years ago.

Groening, who uses a walking frame, is frail and in May the court decided to limit the time he spent in court to three hours a day in view of his health problems, which had led to delays.

In past years, prosecutors in Frankfurt decided not to pursue the case against Groening and other concentration camp workers, saying there was no causal link between their actions and the killings that occurred around them.

Prosecutors in Hanover disagreed, emboldened by the case of Ivan Demjanjuk, who in 2011 was convicted of being an accessory to mass murder despite there being no evidence of his having committed a specific crime while a guard at the Sobibor extermination camp, also in Poland. Demjanjuk died in a German care home in 2012.