Irish Water has confirmed it has received fewer than half of the water charge payments due in its first billing cycle, but says the payment rate "represents a solid start".

The company sent out bills to more than 1.7 million households during its first billing cycle.

Ms Arnett added that payments for the first bill are still coming in.

She said no reminders have been sent to customers who are yet to pay their bills.

She also said Irish Water has "a payment rate that is broadly in line with what would be expected for a new utility sending out a new bill for the first time. This represents a solid start for Irish Water."

More than half a million calls have been made to Irish Water during the 12-week billing period.

Ms Arnett said: "Any customers who have a genuine difficulty paying their bill should contact us to arrange payment terms. We have a range of flexible ways in which people can pay in amounts starting from €5".

Speaking on RTÉ's Morning Ireland, Ms Arnett said: "It is the first time this charge has been issued as a bill and that it does take time for charges to bed down," and added Irish Water has "financial facilities in place to ensure that they are fully funded for 2015."

Ms Arnett said they had no expectation in terms of how many people would pay, but that they expected not everybody would.

She said there was no target set for the first bill but that a target for 2015, as a whole, was set at €271 million from domestic customers.

Minister for the Environment Alan Kelly has said he is very satisfied with the collection rate of water charges and said that he is happy that figure will increase continuously.

Speaking on RTÉ’s Today with Sean O'Rourke, Mr Kelly said when compared with the household charge, it is ahead of the collection rate for that charge after three months.

Mr Kelly said some people only received their bills a week ago for the first billing cycle, and that the idea that everyone will have paid their bills immediately is not realistic.

He said that it takes people at least three months on average to pay bills, and that for people who only received their bill in May and June, that he would not have expected them to have paid by now.

He thanked those who have engaged with Irish Water and said they understand that water needs to be funded into the future.

Tánaiste Joan Burton said she believes there has been a "solid response" to the payment of water charges.

Speaking on Morning Ireland, Mr Murphy said those who did pay their bill should refuse to spend more money on the charges.

He said he does not believe the idea that it takes some time for new charges to "bed down".

Earlier this morning, Minister for Transport Paschal Donohoe said the amount of money collected in charges by Irish Water is in line both with Government expectations and those of the utility and said the figure is slightly ahead of where the household charge was at this stage.

He stressed that this level of compliance has been achieved before reminder letters have been sent out, and that what must be explained to people is the benefit that the collection of these charges is having on the water system already.

He acknowledged there is still opposition to Irish Water, among a "small group of people".

Fianna Fáil environment spokesperson Barry Cowen said the figures represented "yet another nail in the coffin of Irish Water’s credibility".

He said: "If this payment rate continues Irish Water will gain annual revenue of €120m in domestic water charges. The Government is budgeted to pay out €130m in the Water Conservation grant and €25m is due in interest repayments on water meter loans this September.

Sinn Féin's environment spokesperson Brian Stanley has claimed that the low number of people who have paid their water charges proves that threats to attach the charge to people's homes and earnings are not working.

He said: "The recent railroading of legislation to force people to pay water charges was known before the most recent deadline. It was clearly hoped that that would induce a large number of people to pay the bills they had received.

"That threat has failed, and many people do not regard the legislative changes as sufficient to force them to comply. It is also the case that more and more people are of the belief that the next general election will lead to the defeat of the Government, the abolition of water charges, and a restructuring of the water services to repair the damage done by Irish Water."

Róisín Shortall, one of the three founding members, said that she has not paid her water bill and does not intend to in the near future.

She said that she believes the company simply does not work and is a fine example of incompetence within the Government. She said she expects it to go bust before the end of the year.

Ms Shortall said that she agrees that everyone should pay for their utilities but that water is already paid for through taxes.

She said that there should be a basic water allowance and anyone found wasting water in excess of that should be charged accordingly.

Fianna Fáil leader Micheál Martin has said if the rate of collection continues, the Government will lose €35m in revenue due to the water charge.

Speaking in the Dáil during Leader's Questions, Mr Martin questioned the impact this may have on the Eurostat test. 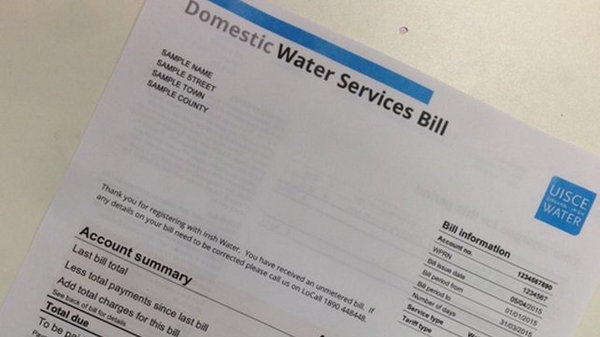 Irish Water collects under half of water charges