The Dáil is to sit late next week to debate controversial water charge compliance measures, which would oblige tenants to pay and make it mandatory for the charge to be met when houses are sold.

TDs are also to debate another measure which would allow payroll and social welfare deductions from householders who did not pay the charge.

The opposition is claiming the measures are being introduced by stealth as amendments in an unrelated Bill, which they say were tabled at the last minute to prevent counter amendments being debated.

People Before Profit TD Richard Boyd-Barrett has accused the Government of sleight of hand in rushing through the amendments that would oblige tenants to pay their water charges.

He claimed the measures were contained in an unrelated piece of legislation and were extremely draconian.

The amendments to the Environment Miscellaneous Provisions Bill would oblige local authority, as well as private, tenants to pay their water charges.

Mr Boyd-Barrett claimed this could result in a threat of eviction in the event of non-payment.

Other measures would oblige anyone selling a house to pay their water charges before the sale went ahead and would oblige local authority tenants buying their houses to do likewise.

The Tánaiste has said elements in the Environmental Miscellaneous Provisions Bill have been well flagged in advance.

Joan Burton said the planned legislation would ensure mechanisms were in place for Irish Water to carry out its work.

A spokesman for Minister for the Environment Alan Kelly said all the amendments had been flagged when the Dáil debated the water charges.

However, Mr Boyd-Barrett insisted they had been slipped into an unrelated Bill, describing the Government actions as sleight of hand and a major abuse of the legislative process.

Fianna Fáil's Seán Fleming accused the Government of using a legislative Trojan Horse to introduce the amendments at the latest possible stage.

He said ministers had been caught red-handed in a manoeuvre that showed they had learned nothing from what he called the Irish Water fiasco. 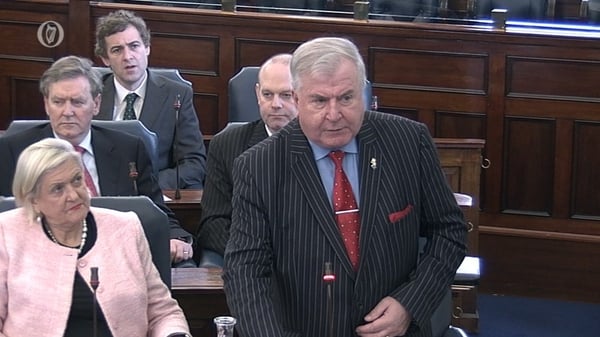