The cost of diverting a transatlantic flight due to the alleged threatening behaviour of a passenger who repeatedly demanded nuts could be £350,000 a court has heard.

The United Airlines plane was en route from Rome to Chicago on Saturday evening when the captain made the decision to touch down at Belfast International Airport after concerns were raised about the man by cabin crew and other passengers.

A district judge in Northern Ireland was told the plane had to dump 50,000 litres of fuel before making the unscheduled stop.

As the crew would have exceeded their legal flying hours if the aircraft had recommenced the journey straight away, 282 passengers were forced to wait almost 24 hours before the plane could take off again, with many having to sleep on the terminal floors.

Jeremiah Mathis Thede, from California, appeared at Coleraine Magistrates' Court today charged with endangering the safety of the aircraft, disruptive behaviour on board and common assault.

The judge was told the 42-year-old joint US and Italian citizen denies the offences and claims there was a "conspiracy" against him.

A constable with the Belfast International Airport Constabulary told the court the incident unfolded when the accused allegedly got up 15 minutes after take-off from Rome, when the seatbelt lights were still illuminated, and demanded "nuts or crackers".

He claimed Mr Thede, from The Alameda in Berkeley, California, refused to sit back down again until he obtained a snack.

The officer said a member of crew managed to "appease" the passenger by giving him some nuts and Mr Thede then retook his seat.

But ten minutes later he got up and demanded more nuts and crackers, the policeman told judge Christopher Holmes.

He said crew members then advised the passenger he would only get another snack if there were some left over after packets had been given to other travellers.

The officer said Mr Thede allegedly replied that he could have as much nuts and crackers as he wanted.

Mr Thede is accused of common assault on the air stewardess he was dealing with.

After these incidents, crew alerted the captain about Mr Thede's alleged conduct.

The constable said fellow passengers had also raised concerns about his behaviour, claiming he kept getting up and down from his seat, repeatedly opened the overhead baggage lockers, blocked the aisles and made numerous trips to the toilets.

The court heard that the captain asked for a number of men to sit around the passenger in case he became violent.

However, the constable acknowledged that "no one was struck" during the flight.

The officer said concerns about Mr Thede's "erratic" behaviour prompted the captain to decide to land at Aldergrove, which is near Lough Neagh, around 20 miles from Belfast city centre.

The flight had already passed over Scotland and had started flying across the Atlantic when it turned round.

"The captain dumped 50,000 litres of fuel before he landed safely at the International Airport," said the officer.

Asked by a prosecution barrister to assess the cost of the redirection, the constable replied: "It would be upwards of 300,000 to 350,000 pounds. There is compensation for passengers.

"There were 269 passengers lying sleeping on the floor of the terminal because there were no hotel rooms found for them."

The officer told the judge that as he was escorting Mr Thede from the plane he allegedly made a rude gesture to one female passenger who was taking a picture.

The constable said during a police interview Mr Thede denied committing any offences.

"He said it wasn't him, there was a conspiracy theory against him, people were picking on him," he said.

The solicitor said alcohol was not a factor, as a police doctor had examined him upon arrest and deemed him "fit to be interviewed".

"His position is he's done nothing wrong and effectively this is an over-reaction by staff in the plane, those in charge," said the lawyer.

The airport police constable objected to the granting of bail, on the ground that the accused could abscond the jurisdiction.

The judge said it was too early to consider a bail application as a number of background checks on Mr Thede had to be carried out with the authorities in the US.

He also directed a psychiatric examination be undertaken by prison doctors, though noted it was up to the accused whether he co-operated with the assessment or not.

Mr Thede was remanded in custody to appear before Antrim Magistrates' Court via video-link next Tuesday. 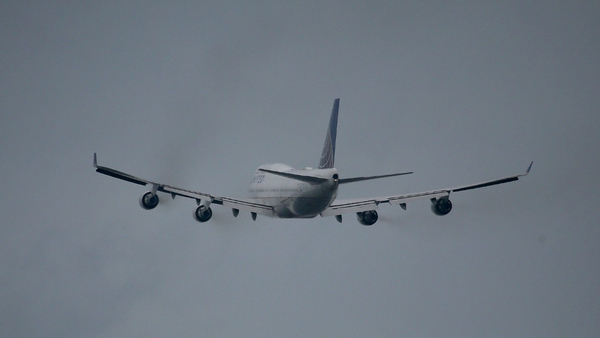 Man charged after flight forced to divert to Belfast