Private motorists in Dublin face a total ban in College Green and parts of the quays as part of a plan to prevent through traffic and encourage sustainable transport.

The Dublin City Centre Transport Study aims to improve movement for buses, trams, cyclists and pedestrians as transport authorities plan to cope with an expected 20% increase in commuter numbers.

Some of the restrictions are necessary because of Luas works, but will become permanent afterwards.

It is proposed to make the Bus Gate at Dublin's College Green operational 24 hours a day.

At present private cars are prohibited during morning and evening rush hours from Monday to Friday. 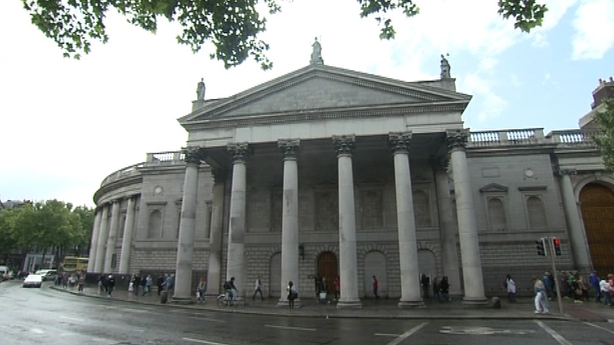 The new proposals jointly unveiled today by the National Transport Authority and Dublin City Council would enforce the restriction seven days a week and also extend the ban to taxis.

A number of other measures to stop through-city traffic include a ban on private cars on Bachelor's Walk on the North Quays and a section of the South Quays, possibly George's Quay.

The plan would create a civic space at College Green and the pedestrianisation of part of St Stephen's Green North and Suffolk Street at either end of Grafton Street.

Priority on many city streets would also be given to Swiftway, the planned Bus Rapid Transit system which runs like a Luas, with bigger carriages and fewer stops.

Streets like Westmoreland Street would have wider pavements and better cycling lanes.

No traffic would be allowed to turn left from Westmoreland Street onto the quays removing, what the report calls, a "major source of conflict between pedestrians and vehicles on this thoroughfare". 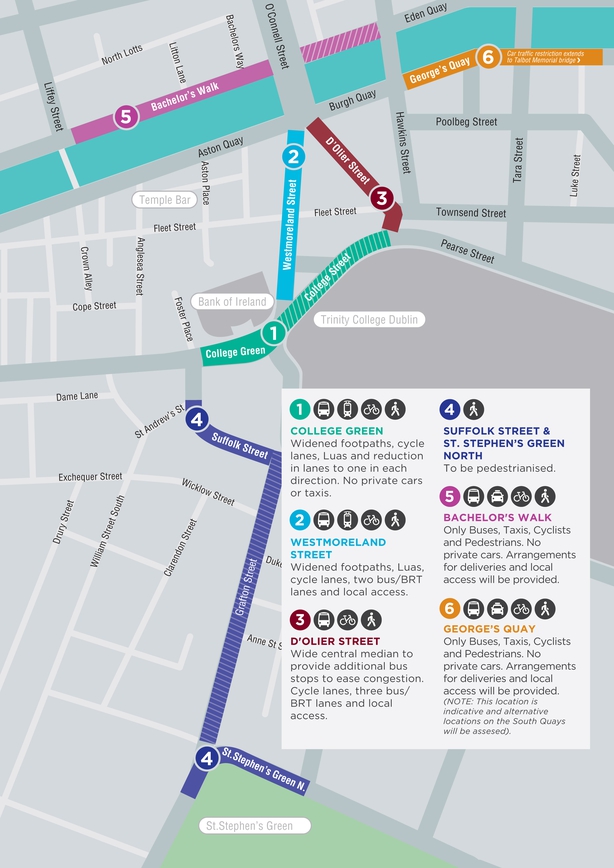 D'Olier Street would be a bus interchange location with a central meridian for Dublin Bus and a stop for the planned Swiftway bus service.

Car through-traffic would be prohibited with only local access allowed.

The report points out that 70,000 vehicles a day are using O'Connell Bridge junctions, which is equal to 60% of the daily traffic on the M50. 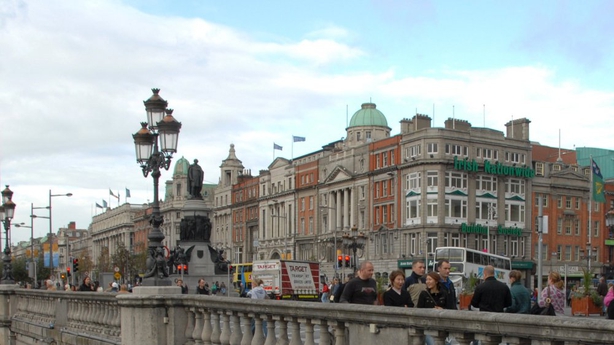 At the same time, 100,000 pedestrians are using O'Connell Bridge, which presents "major conflicts" according to the report.

The study estimates that the city will have to accommodate an extra 42,000 journeys during the morning rush hour by 2023 - an increase of over 20%.

It states "it will not be possible, or desirable, to cater for this demand by car".

The study covers the next eight years and the NTA intends to spend €150 million on the plans.

Details of the study are available on the council's website.

Dublin City Council's Brendan O'Brien said the plan is a look at the most efficient use of the city space.

He told RTÉ News At One that it is partly about moving cars away from a particular area and what advantages that gives.

Mr O'Brien said the council wants to encourage more people into the city centre and wants to make sure that public transport has the capacity to provide for the most users.

He insisted that car users will still be able to access the city centre, but it is about a reallocation of the space.

Mr O'Brien said the public consultation process will be open from tomorrow and the council would like to hear people's views.

Speaking on the same programme, Conor Faughnan of the AA said that the plan does appear to be shot through with the underlying assumption that when you stop a private car from moving, you do the city a favour.

Mr Faughan questioned why the council wants to move motorists away from the city centre.

He said that it could do very significant damage to the city's economy, adding "why does victory seem to be a place without a car?"

- A multi-storey carpark at Heuston Station for train users

- An overhead walkway to link Connolly Station to Busáras and Luas

- One-way streets to be made two-way for cyclists

Conor Faughnan of the AA has said the plan does appear to be "shot through with the underline assumption that when you stop a private car from moving, you do the city a favour".

Speaking on RTÉ's News At One, he questioned why the council want to do move motorists away from the city centre.

He said it could do very significant damage to the city's economy, adding "why does victory seem to be a place without a car?"

"If you simply make the assumption that four wheels are bad and two wheels are good and you allow that to inform everything you are doing, then what you wind up doing is that you could, ultimately, create a Dublin city centre that is so calmed and park-like - that you could have a picnic on O'Connell Bridge, but, ultimately, you do very significant damage to the city's economy in the process." 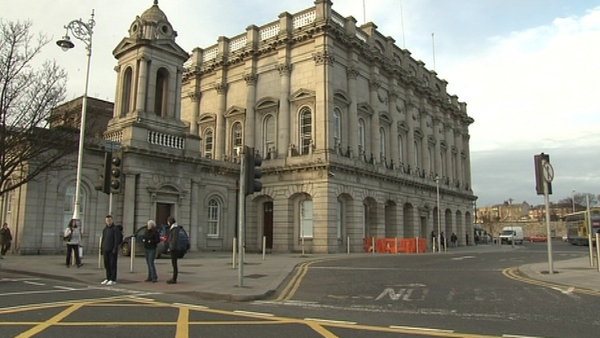