Emergency services in Ukraine have stopped a fuel depot fire outside Kiev from spreading but the fate of three firemen missing after the blaze triggered a powerful explosion was unknown.

The fire burned overnight and by morning had spread to at least 16 tanks, most of them storing petrol.

That sent a huge pall of black smoke over the area around the depot near Vasylkiv, 30km from Kiev. The depot's owners said they suspected arson.

A security official said there was no longer any threat of the blaze spreading and emergency services were putting out remaining fires in the depot.

Entire oil tanks were consumed in the flames, which emergency services had feared would spread to another fuel depot nearby.

Weapons and equipment were removed from a neighbouring military base to a place of safety.

One person died in hospital after being hurt in the incident and several others were injured, Ukrainian media said.

Three firemen were unaccounted for after the explosion ripped through the area as they battled the fire. 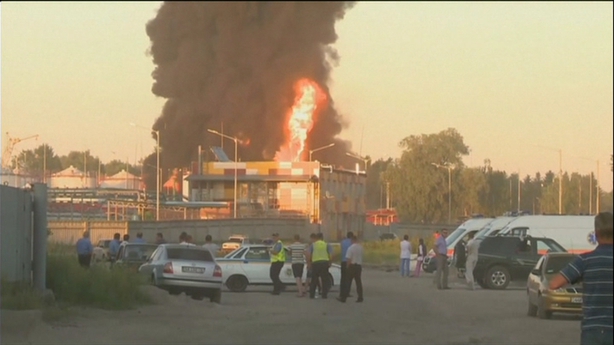 Rescuers had evacuated people from within a two-kilometre radius of the fire.

The owners of the depot, BRSM-Nafta, said in a statement they believed the fire was the result of an arson attack aimed at damaging its business.