At least seven people have been injured after anti-gay activists attacked a gay pride march in Kiev, Ukraine.

It is reported that around 25 assailants attacked the parade throwing flares and wounding policemen before being arrested.

Among those injured were five policemen.

The socially-conservative country, which is locked in a war with pro-Russian insurgents, is seeking a closer alliance with Europe and remains keen to promote civil liberties freely enjoyed in much of the West.

The March of Equality parade staged at a scenic stretch of the Dniepr River on the northern outskirts of Kiev was scheduled to last only ten minutes out of security concerns.

Members of the Pravy Sektor (Right Sector) nationalist organisation had on this occasion threatened to disrupt the protest and defend more conservative traditions.

But around 100 activists still showed up for the rally after being informed of its location by the main organisers only a few hours in advance. 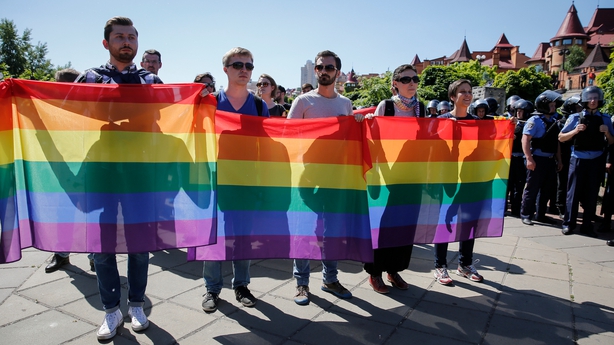 "This march shows that we exist. We are fighting for equal rights that, unlike others in Ukraine, we currently lack," said a 31-year-old woman who agreed to identify herself only as Vira out of concerns for both her safety and future career prospects.

"I am very frightened," she admitted. "But I am also very proud of myself - proud that I came out and so many people supported us."

The scuffles broke out when the police tried to keep a few dozen young men who had jumped out of a bus bearing Right Sektor insignia from attacking the peaceful marchers.

The Kiev police department said that 25 nationalists, many of them clad in black balaclava, had been detained and taken in for questioning.

Ukrainian President Petro Poroshenko said on the eve of the protest that he fully supported the marchers but would refrain from attending the event.

"As far as the 'March of Equality' is concerned, I view it from both the perspective of a Christian and a pro-European president.

"I will not be taking part," said the 49-year-old leader.

"But I see no grounds for someone to try and disturb it, since this is the constitutional right of every Ukrainian citizen."