EU's commissioner for Economic and Monetary Affairs has hailed "genuine progress" in some aspects of the negotiations over the Greek debt crisis but said there were still outstanding points.

Progress had been made on a "whole series of topics" but "there are still a certain number of questions to be discussed that are really weighty", Pierre Moscovici said in the French parliament, pointing to pension and labour market reforms.

"There is genuine progress on a certain number of subjects, I would mention VAT ... the modernisation of the administration, talks that have begun over pensions," added the commissioner.

Nevertheless, Mr Moscovici said "we have to persuade the Greek authorities to accept" the deal offered by the debt-laden country's creditors and backed by France and Germany.

He acknowledged the offer was "demanding" but said it was "nothing less than a package that aims to ensure Greece's future in the euro zone and prosperity for the Greek people."

The deal is not "take it or leave it. We haven't got to that stage. We need a genuine dialogue," stressed Mr Moscovici.

"However, at the same time, the idea is to come to an agreement quickly."

Earlier European Central Bank President Mario Draghi has called for a "strong agreement" with Greece to ensure it stays in the eurozone and has a sustainable economy.

He said negotiations had not yet reached the point where the ECB could loosen the strings to allow Greece extend issuance of short-term government bills as collateral for ECB liquidity.

Mr Draghi made his remarks ahead of talks between Greek Prime Minister Alexis Tsipras and European Commission head Jean-Claude Juncker later which are not expected to produce a final deal on Greece's bailout.

"We do not expect any final outcome tonight, this is a first discussion not a concluding one," spokesman Margaritis Schinas told a news briefing, saying that the meeting this evening was a "personal invitation".

Mr Juncker is set to meet Mr Tsipras in Brussels in a bid to reach a deal on bailout talks with Greece.

"I still have some problems to sort out in connection with what we call the Greek case, which will require me to hold various meetings today, including one with the Greek prime minister," Mr Juncker said.

Speaking at a development conference, he said he would "have to leave at the end of the discussion" to start his meetings.

Aides to Mr Tsipras had said he was coming to Brussels to present Mr Juncker with his government's 46-page proposal to overhaul the Greek economy and meet the demands of its bailout.

Earlier, a Greek parliamentary spokesman said the country will not make its June IMF debt repayment if there is no prospect of a deal with lenders.

"If there is no prospect of a deal by Friday or Monday, I don't know by when exactly, we will not pay," spokesman for the ruling Syriza party Nikos Filis told Mega TV.

French Economy Minister Emmanuel Macron said he is confident an agreement between Greece and its creditors could be reached.

"We are confident in the chances of an agreement because there has been an extremely intense Franco-German work on this subject.

"The last few days have shown it and the next days will show it," Mr Macron told reporters alongside his German counterpart Sigmar Gabriel.

Yesterday Greece's creditors drafted the broad lines of an agreement to put to the government in Athens in a bid to end four months of difficult negotiations and release aid before Greece runs out of money.

The joint effort by the European Commission, the European Central Bank and the International Monetary Fund sets out the terms for a cash-for-reforms deal.

It came after the leaders of Germany and France held emergency talks with those institutions in Berlin on Monday night to press the lenders to bridge their own differences and find a solution.

"It covers all key policy areas and reflects the discussions of recent weeks. It will be discussed with (Greek Prime Minister Alexis) Tsipras tomorrow," a senior EU official said.

Another official said German Chancellor Angela Merkel and French President Francois Hollande would put the plan to Mr Tsipras by telephone to try to secure his acceptance.

"The prime minister will be in Brussels tomorrow with the Greek proposal in his luggage," the official said.

Mr Tsipras, who has vowed not to surrender to more austerity, tried to pre-empt a take-it-or-leave-it offer by the creditors, sending what he called a comprehensive reform proposal to Brussels on Monday before they could complete their version.

Eurozone officials branded the Greek text insufficient and said it was not formally on the table.

The Greek leader faces a backlash from his own supporters if he has to accept cuts in pensions and job protection to avert a default and keep Greece in the eurozone. 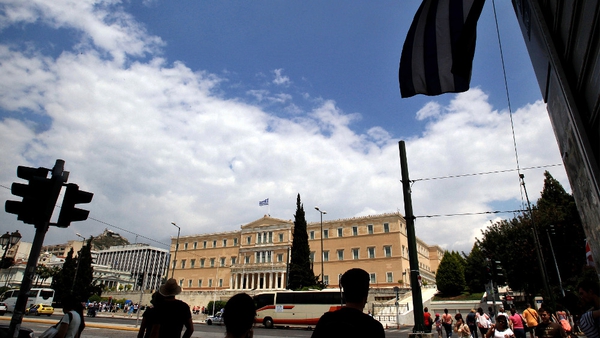 European Commission, ECB and IMF agree details of deal to be put to Greece