A teenage football player has died while playing for his team in an under 16s match in Dublin today.

The boy, who has not been named, played for Belvedere FC.

It is understood the lunchtime game against St Kevin's Boys had just begun in Santry when he collapsed.

The club has issued a statement saying: "Belvedere Football Club is mourning the death of one of our U16 players who tragically collapsed while playing for the club today.

“While all of our members are in deep shock, our thoughts and prayers are with his family at this tragic time.

“We ask that the privacy of the family be respected as the club supports them in grieving their boy. We won't be releasing the player's name until all family members have been contacted.

“The club will also support our U16 players, coaches and parents who are devastated at the loss of a very popular team-mate." 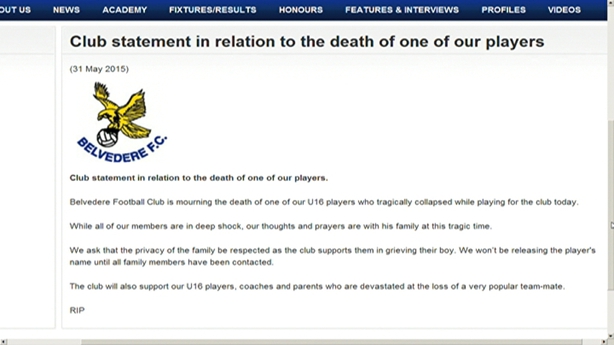 The club is one of the most successful schoolboys clubs in the country. Its social media accounts have been flooded with messages of sympathy and support from around the world.

Thanks to everyone for their comments. Everyone at the club appreciates the support