The Dáil has voted to sell the State's 25.1% stake in Aer Lingus to International Consolidated Airlines Group (IAG).

The vote was carried with 74 TDs in favour and 51 against, with Labour's Michael McNamara the only Government TD to oppose the motion.

In a statement Mr McNamara said: “I could not support the vote to sell the Government's 25.1% share in Aer Lingus. This is not a decision I came to lightly.

"I spoke with the Minister for Transport, the Tánaiste, as well as experts in European law before concluding that the sale was not in the best interest of the country, and in particular regional development.

Mr McNamara added: “We are an island nation and connectivity to the world market is essential for both industry and tourism. I am not prepared to gamble with what I believe is key to the economic development of this State, all of this State”.

Speaking on RTÉ’s Six-One News he raised doubts over the enforcement of the Government's golden share (the mechanism to protect connectivity). 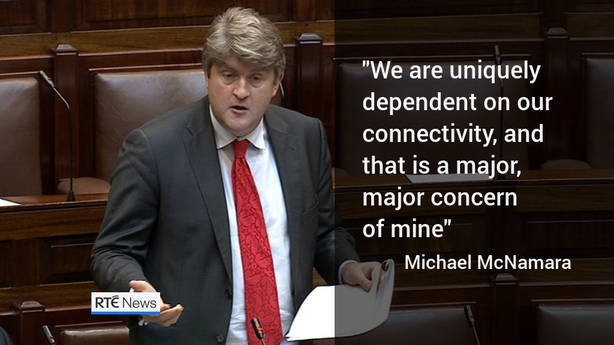 Mr McNamara said attempts in the past to protect the Government's golden share have not worked and that IAG may decide to renege on its commitment and dispose of its Heathrow slots.

He added he is still a member of the Labour Party and he would hope to run as a Labour Party candidate in the next general election.

However, Labour Chief Whip Emmet Stagg has written to Mr McNamara and informed him he has lost the party whip over his decision to vote against the Government on the sale of Aer Lingus.

Speaking in Ballaghadereen in Co Roscommon, Taoiseach Enda Kenny said that despite unions not agreeing in principle to the sale of the State's share in Aer Lingus, it is a "very good deal" because the Irish public have not owned the airline for quite a while.

Mr Kenny said the State owns a share worth 25.1% and in the case of disposal of assets another 5% is needed in order to get a blocking mechanism.

He said this no longer applies, however, because of the new arrangement where it is invested in the finance minister of the day and for many years to come.

The Taoiseach said it was about restoring influence over the use or disposal of slots that we did not have, or were given away by the previous administration.

He also said that it is a new opportunity to grow the airline and create more than 600 jobs.

Mr Kenny was critical of comments that the decision to sell was rushed through the Dáil, saying the Government has held a two-day debate with 12 hours of discussion.

The Taoiseach said many of the Labour TDs who had expressed concern about the sale have now agreed as a block to say this is a very good deal.

Mr Kenny said he heard Labour TDs today saying that all the issues have now been dealt with and it was time to get on with the decision of the Government to dispose of the assets and get on with the remainder of the process.

IAG and Aer Lingus have both welcomed the Dáil’s decision to approve the sale.

Aer Lingus Chairman Colm Barrington said it was a compelling transaction for Aer Lingus and its stakeholders.

He said: “Shareholders will realise an attractive return through the premium that the IAG offer provides over the level of our share price immediately prior to the announcement of IAG's offer.

“Aer Lingus will reap the commercial and strategic benefits of being part of the much larger and globally diverse IAG Group and as a member of the Oneworld alliance of 17 airlines that together carry over 500 million passengers”, he added.

IMPACT trade union said that the vote would elevate staff concerns about possible redundancies when the takeover is completed.

IMPACT National Secretary Matt Staunton commented, "We face a mounting challenge to secure the jobs and pay for existing and future staff.

“Too many questions remain about what management will look to extract from its workforce when the inevitable restructuring phase commences under new ownership.

"For the staff at Aer Lingus, genuine concerns about compulsory redundancies, the prospect of a further erosion of their terms and conditions, and the fallout from future restructuring under IAG all remain", he said.

Opposition parties have also criticised the Dáil’s approval to sell its stake in the airline to IAG.

Sinn Féin President Gerry Adams has challenged the Taoiseach's assertion that the Government sell off of Aer Lingus is a good deal.

Mr Adams said: "The Taoiseach says this because he believes in dismantling state assets. He believes in privatisation across the board. He has no concern in the interests of the workers, passengers, or citizens that made a profitable."

Meanwhile, Renua leader Lucinda Creighton has supported the sale, but said “it is a matter of grave concern that there has been no opportunity to engage in a proper and full question-and-answer session with the minister”.

Attempts to hold debate to postpone vote 'dealt with'

Meanwhile, a spokesman for the Oireachtas said that Fianna Fáil's attempts to hold a debate to postpone the vote on the share sale were dealt with as part of the Government's motion on the sale.

Fianna Fáil wanted the vote on the sale of the State share in the airline delayed until the Nyras report is debated.

The Dáil this afternoon voted against postponing the vote on the sale in order for it to be considered further by the transport committee.

Fianna Fáil's Timmy Dooley then called for the Dáil to sit next week rather than guillotining the vote this evening, but that was also put to a vote and defeated.

Earlier, Aer Lingus management moved to reassure Labour Party TDs that it will not introduce compulsory redundancies or outsource employment.

The move came after an internal report for the airline identified cuts of more than €58 million.

The analysis of the finances at the airline was carried out by international aviation consultancy company Nyras.

It concludes the airline should set aggressive but achievable targets for short-haul cost efficiency at a minimum of €60m.

Aer Lingus Chief Executive Stephen Kavanagh said redundancies or the outsourcing of jobs will not happen where the savings can be made within the airline.

He made the assurances in a letter to Minister of State Nash and Chairman of the Labour Parliamentary Party Jack Wall last night.

However, Mr Kavanagh said such a commitment would involve flexibility from staff and trade union representatives to achieve these savings.

There was also a pledge to engage with unions to register employment agreement across the company.

He said savings can be achieved through the manner in which services for ground handling, not directly provided by Aer Lingus, are procured.

He said the ground-handling services referred to in the report are third-party services that are bought by the airline.

He said that cutting costs in this area will have no impact on direct employment at Aer Lingus.

SIPTU representative at Aer Lingus Owen Reidy has welcomed Aer Lingus' commitment to the registered employment agreements should the sale  go ahead.

Mr Reidy told RTÉ's News at One, that while he welcomes this progress, he is still against the sale of State assets.

He said if Aer Lingus does what it has said it will in the letter from Mr Kavanagh, then the union will have vindicated its position and that it will give some comfort to its members.

He said entering into the registered employment agreements should be done before the sale of Aer Lingus. 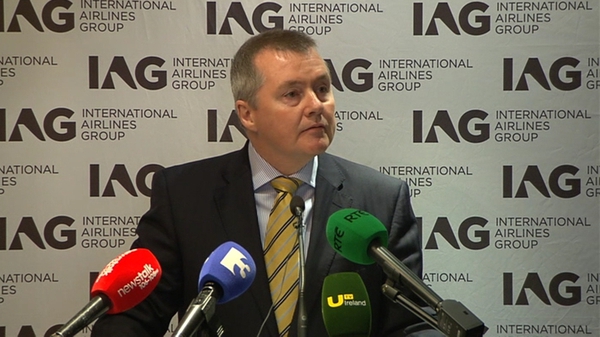