The Catholic Archbishop of Dublin, Diarmuid Martin, has said the marriage referendum results show that the Catholic Church has a huge task in front of it to get its message to young people.

In an interview with RTÉ News, he said that many of young people who voted Yes were from Catholic schools.

He said the Catholic Church needs "to have a reality check across the board."

Following the passing of the referendum on same-sex marriage Archbishops and Bishops of the Church of Ireland said the Church "defines marriage as between a man and a woman, and the result of this referendum does not alter this."

The Presbyterian Church in Ireland said it was "deeply disappointed and saddened that the Constitution will no longer reflect the historic - and Christian - view of marriage that it is exclusively between one man and one woman."

"While the result is a significant change for Irish Society, as a Church we will continue to reach out to all people, whatever their situation, as all are equally welcome" the statement said.

Bishop Paul Colton of Cork Cloyne and Ross said this evening he is proud to have been the first bishop to have supported the referendum proposal to legalise same-sex marriage.

He echoed Archbishop Diarmuid Martin's statements saying all churches have a long road ahead.

I agree with Archbishop Diarmaid Martin - not just his church, but all churches need a reality check. Churches have a long journey ahead.

His brother Bishop Michael Burrows of Cashel and Ossory also supported the Yes side in the campaign.

They did so despite the Church of Ireland teaching that marriage can only take place between a man and a woman, a position endorsed by the Church's only woman bishop - Bishop Pat Storey of Meath and Kildare.

No campaign reaction to referendum passing

Leading members of the No campaign have offered their congratulations to the Yes campaign on their victory.

In a statement, Mothers and Fathers Matter said: "This is their day, and they should enjoy it.

"From our point of view, we have represented a proportion of the population greater than those who support any political party.

"One in three Irish people in this campaign was not represented by the political establishment, the media, or the institutions of state.

"We are proud to have fought on behalf of those voices when nobody else would."

Independent Senator Rónán Mullen extended his best wishes to the Yes side.

In a statement, he said: "Our country has divided two-to-one on the proposal to change the meaning of marriage in our society.

"What we are not divided about is how we feel about gay people.

"Every human being has equal dignity and deserves equal respect. We are all committed to that.

"The No campaign was concerned about the profound effects of redefining marriage, and in particular about the consequences for some children who would be less likely to experience the love of a mother and father in their lives in the event of a Yes vote.

"That concern was real and it remains justified."

Independent Senator Rónán Mullen says there is a 'new dynamism' by those in the No campaign https://t.co/0T1urI2mNa

Independent TD Mattie McGrath, one of a few Oireachtas members to call for a No vote, said that "the people have spoken".

He said: "We have to congratulate the Yes side on their victory and hopefully the promises that were made by the Government ministers will be kept now."

Mr McGrath said he never expected the No side to do better than it had.

"I never expected it to be much better, with the whole weight of the political establishment and public sector [in favour], Google, you name it, the Garda Representative Association.

"You couldn't fight that and move that mountain … I thought it might be even worse." 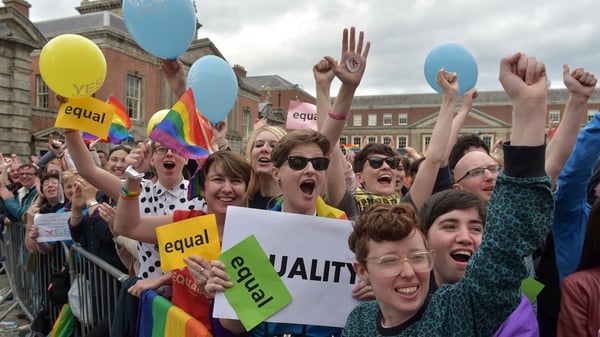