Taoiseach Enda Kenny has joined a number of leading Irish sports people to call for a Yes vote in the upcoming referendum on same-sex marriage.

Earlier, Mr Kenny said he believed the referendum result would be a lot closer than the polls indicate.

Meanwhile, the group Mothers and Fathers Matter has released new posters in its campaign for a No vote in the referendum on 22 May.

The Catholic Primate of All-Ireland Archbishop Eamon Martin has repeated his call for a No vote in the referendum.

In Lourdes this morning, Dr Martin said that in the coming days the people of Ireland would be asked to vote in a referendum which would change the meaning of marriage and family in the Constitution of Ireland.

He said the Bishops of Ireland were clear that they could not support this amendment and they had asked the people of Ireland to reflect and pray very carefully before voting.

Speaking on TV3 today, Mr Kenny said Ireland had gone on a journey from decriminalisation of homosexuality, non-discrimination in the workplace, Civil Partnership Bill, the Child and Family Bill and now a move towards marriage.

Mr Kenny described the referendum as a "first in world terms" in that the question was being put towards the electorate.

He said the referendum had nothing to do with religious ceremonies or children.

Speaking while canvassing for a ‘Yes’ vote, Fianna Fáil leader Micheál Martin said that it was important for people to get out and vote.

He said: “My sense across the country is that there is a strong sense of goodwill towards the proposition, but there will be an absolute need for people to turn out and to vote and to cast their vote on the day.”

Meanwhile, Sinn Féin president Gerry Adams said that although there has been a positive response to the 'Yes' campaign, there is no room for complacency.

He said: "I think we need to be very focused and ensure that the vote gets out on the day."

Referendum Commission chair Mr Justice Kevin Cross has said that the referendum outcome would not affect the issue of surrogacy or adoption.

Minister for Agriculture Simon Coveney has said he is really glad with the clarity from the commission that surrogacy and adoption are not part of the campaign on the upcoming referendum.

Mr Coveney said surrogacy had been a distraction in this campaign, and that the No side had been talking about it because they knew people were concerned about the issue.

There had been a political strategy from the No campaign to try to muddy the waters, he said.

Tom Finnegan of Mothers and Fathers Matter said comments in recent days that issues of surrogacy and adoption were nothing to do with the referendum campaign did not directly engage with the points that his group had been making. 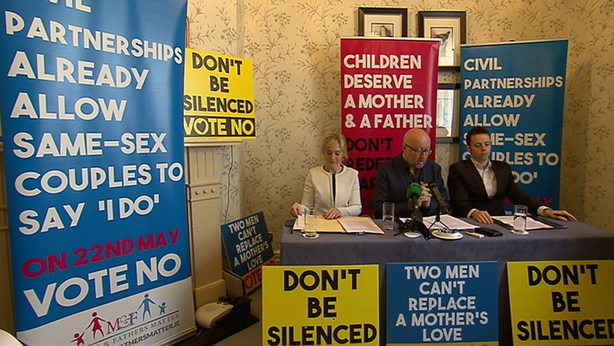 Speaking at a news conference in Dublin, he said if the referendum passed, same-sex couples would have a constitutional right to procreate.

He said it was possible that a future court may decide or be forced to decide that that right includes a right to avail of surrogacy and donor-assisted human reproduction.

Dr Finnegan said if the referendum passes it will be impossible for the Oireachtas to give a preference in law to a child having a mother and a father.

These precise points had not been dealt with by anyone, including the Referendum Commission, he said.

These points were germane to the discussion, he said, and did illustrate how children were part of redefining marriage in Article 41 of the Constitution.

He also said his group had given evidence to the gardaí in relation to what he said was hundreds, if not thousands, of No campaign posters taken down and defaced all around the country.

He said 30%-40% of posters in the capital had been taken down, and whole towns around the country had No posters taken down or defaced.

Dr Finnegan said on social media people were posting images of themselves taking down or defacing posters and bragging about it.

He said the Government should condemn this because it was an attack on democracy and on the integrity of public debate.

A priest in Co Wexford has become the first in the Diocese of Ferns to publicly encourage people to vote yes in the upcoming marriage referendum.

Fr Richard Lawless is the administrator at Saint Aidan's Cathedral in Enniscorthy.

Speaking on South East Radio this morning, he said he did not want to offend anyone but said at the same time it is important to respect one's own convictions.

Meanwhile, Bishop of Ferns Denis Brennan issued a statement on the meaning of marriage in advance of the referendum, saying children have a natural right to a mother and father.

Mullen raises questions over US donations

Separately, Senator Ronan Mullen and three other members of the Oireachtas advocating a No vote have said that they are concerned about money allegedly given by Atlantic Philanthropies to a number of organisations campaigning for a Yes Vote, as well as to Tusla.

Speaking outside Leinster House, Senator Mullen told journalists that the Philanthropic Organisation funded by Chuck Feeney donated $17 million to groups campaigning for a Yes Vote, including Marriage Equality, Amnesty International, GLEN and the Irish Council for Civil Liberties, while also giving millions of dollars to the statutory Child and Family Agency.

Sen Mullen noted that Tusla had just cut funding for Catholic marriage support agency Accord for marriage counselling services, and said "we want to know whether all of these issues are connected."

Although he did not name any individual the senator said that a senior member at Tusla was "actively pushing on one side of this referendum" and was "closely connected to the Yes equality campaign."

Last month Tusla announced that it was to receive €8.3m from Atlantic Philanthropies for an early intervention and prevention programme.

In a report on its website entitled "Catalysing LGBT Equality and Visibility in Ireland" Atlantic Philanthropies named the Gay and Lesbian Equality Network (GLEN), Marriage Equality, the Transgender Equality Network Ireland (TENI) and LGBT Diversity as organisations funded for the purposes of strengthening the LGBT sector in Ireland.

"The money coming from Atlantic Philanthropies has been about changing attitudes in Ireland, up to and including bringing about same-sex marriage and that alone is a massive issue without precedence in Ireland," said Sen Mullen.

When asked if any campaign group advocating a No Vote had received money from abroad, he said: " To my knowledge I have never heard of a situation where any such intervention has taken place...

"I am not involved in the running of such organisations but from everything I am hearing the money, it's a David and Golliath situation, the No campaign is massively underfunded and I think the difference is American money and sometimes indirectly State money from Ireland."

Mr Mullen said that details of the funding from Atlantic Philanthropies were widely available.