The Scottish National Party has won a historic victory at Westminster, with Nicola Sturgeon's party taking seats that had long been Labour strongholds.

While David Cameron's Conservatives became the largest party in the UK, the SNP won 56 of the 59 Scottish seats.

Labour Party leader Ed Miliband said a "surge of nationalism" had overwhelmed the party in Scotland and told his colleagues there he was "deeply sorry" for what had happened.

"The Scottish lion has roared this morning across the country," former SNP leader Alex Salmond said after he won the Gordon constituency.

The former Scottish first minister polled more than 27,000 votes to take the seat from the Liberal Democrats.

As his result was declared, Mr Salmond told supporters at the count in Aberdeen: "There is a swing under way in Scotland the likes of which has not been seen in recorded politics.

"It is an extraordinary statement of intent from the people of Scotland." 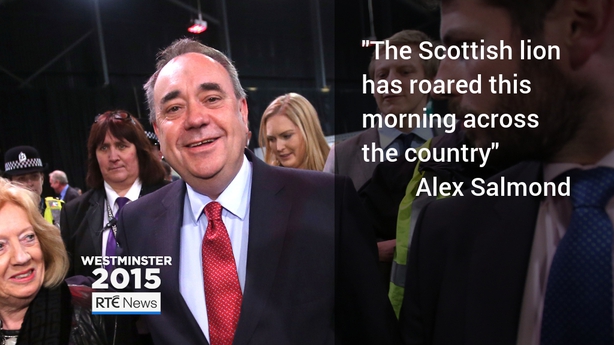 Labour earlier lost what was its safest seat in Scotland, the seat once held by former British prime minister Gordon Brown, to the SNP.

The SNP's Roger Mullin seized the Kirkcaldy and Cowdenbeath constituency from Kenny Selbie.

With some constituencies showing swings from Labour to the SNP of more than 30%, Douglas Alexander, the shadow foreign secretary and Labour's election campaign chief, was the first big defeat of the night.

Student Mhairi Black, 20, ousted the former government minister from Paisley and Renfrewshire South, the seat Mr Alexander had held since 1997. 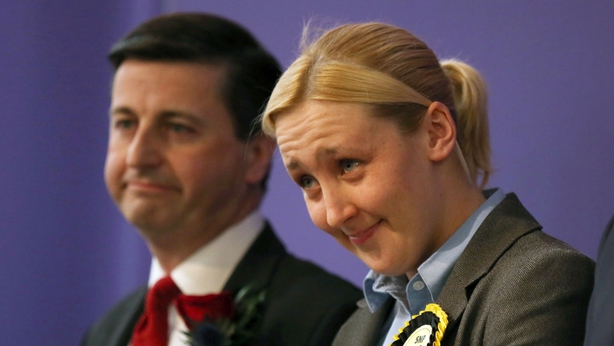 Mr Alexander described it as a "very difficult night" for Labour.

When Ms Black takes her seat at Westminster, she will be the youngest MP to do so since the 17th century. 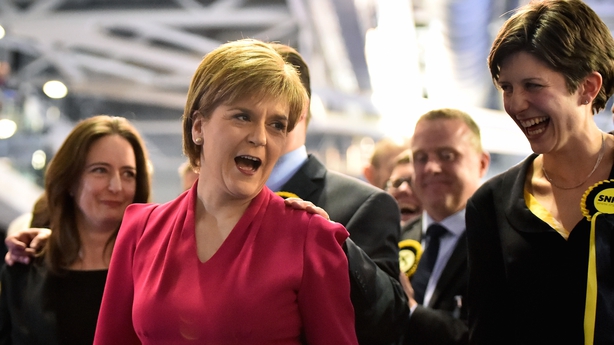 A one minute guide to the most talked about woman in British politics - SNP's Nicola Sturgeon by @philipbromwell https://t.co/Mzb7F1Ikpe

Scottish Labour leader Jim Murphy declared the fightback will start immediately after losing his seat to the SNP.

He had held East Renfrewshire for nearly 20 years, but his once safe majority was eliminated as Kirsten Oswald swept to victory with 23,564 votes to Labour's 19,295. 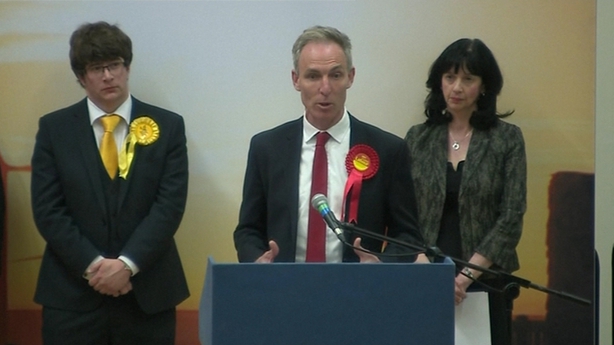 Mr Murphy said it was an "enormous" moment for the SNP, but he appeared to be in good spirits as he declared the fightback for Labour in Scotland starts tomorrow.

He added: "The fight goes on and our cause continues.

"I know hundreds of thousands of Scots still believe in the progressive policies the Labour party stands for.

"The Scottish Labour party has been around for more than a century. A hundred years from tonight we will still be around.

Labour's Ian Davidson, who lost his Glasgow South-West seat to the SNP, said Mr Murphy could not now continue as leader and called on him to resign.

He told the BBC: "He was elected as party leader on the basis that he was an MP. Only MPs and MSPs can stand for the leadership.

"Morally, as the man who has led us to the biggest ever disaster that Labour has suffered in Scotland ... of course he can't continue.”

Liberal Democrat Scottish Secretary Alistair Carmichael managed to hold on to his Orkney and Shetland constituency, but with a reduced share of the vote.

The tone was set when nationalist Alan Brown won the first seat of the night in Scotland, with 30,000 votes, unseating Labour's Cathy Jamieson to become the new MP for Kilmarnock and Loudoun.

The SNP went on to enjoy unprecedented successes throughout the course of the night.