Primate of All Ireland and Archbishop of Armagh Eamon Martin has said that to interfere with the definition of marriage is not a simple or trivial matter.

The Archbishop addressed the upcoming same-sex marriage referendum, which is taking place on 22 May, in a statement released this afternoon.

He said: "Until now, Ireland has accepted that it is in the best interests of children and of society to promote and protect the model of children being born and raised in a family with their biological parents.

"The proposed amendment to the Constitution will remove the unique and privileged status in society for the marriage between a man and a woman."

Archbishop Martin said that Irish bishops have already said they "cannot support an amendment to the Constitution which redefines marriage and effectively places the union of two men, or two women, on a par with the marriage relationship between a husband and wife which is open to the procreation of children".

He said: "The Church's vision for marriage and the family is based on faith and reason and it is shared by many people of all faith traditions and none.

"Since time immemorial, Church and State have recognised marriage to be of fundamental importance for children, mothers and fathers, and society.

"To interfere with the definition of marriage is not a simple or a trivial matter."

The statement added: "How have we got ourselves into the situation that when people stand up to guard the dignity of difference between a man and woman, and speak for the traditional definition of marriage, they are often portrayed as being against freedom, or against equality?

"How is it that many people won't even raise these issues in their families and workplaces for fear of being ridiculed or condemned as homophobic?

"Could we not expect at least some of our legislators to engage in public discussion on both sides of this debate?"

Meanwhile, Spokesperson for Yes Equality Grainne Healy said:
"We have always respected the right of the Catholic Church Hierarchy to express its views."

She added: "We note the lengthy statement issued by Archbishop Eamon Martin this evening. We disagree with much of its content and are disappointed with its tone."

Ms Healy said: "While it is directed at church goers, it raises many questions for those of us actively engaged in issues surrounding equality."

She said: "Now that the referendum campaign is underway, and in light of his statement, we invite Archbishop Eamon Martin to discuss with us the issues he raises surrounding the Marriage Equality Referendum in any public or media forum."

"A core element of the Yes Equality has been having conversations with people all across Ireland; people of all ages and of all beliefs and none. We will continue these conversations, to listen to and talk with people up to Polling day." Ms Healy added. 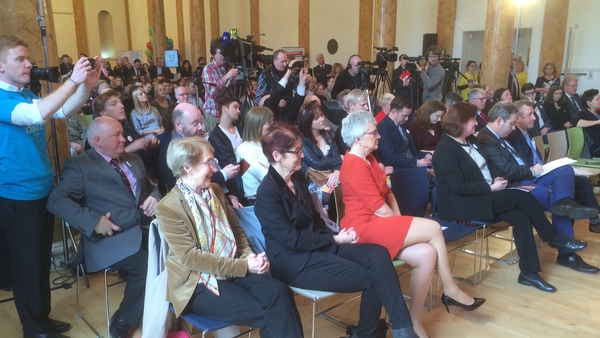