Bus Éireann and Dublin Bus have confirmed they will take legal action to recoup the costs of the two-day bus strike which began at midnight on Thursday.

The companies will make an emergency application to the High Court today and pursue legal action to recover their financial loss which is estimated to run into millions.

Bus Éireann and Dublin Bus have served legal letters on both trade unions informing them of this move seeking compensation for losses including reputational damage.

They described the dispute as illegal, unprecedented and totally without justification.

Reacting to the news, the General Secretary of the National Bus and Rail Union has said it is unfortunate that the bus companies have chosen to take this path to resolve what is an industrial dispute.

Dermot O'Leary said the NBRU would pass the letter it received to its legal representatives.

Mr O'Leary said that the NBRU had undertaken a ballot of its members for industrial action, and the union feels that this is a genuine trade dispute.

Bus Éireann and Dublin Bus say they must protect the future interests of the businesses which sustain thousands of employees.

They stress that they are not taking the action against their employees but to seek to recover losses from the NBRU and SIPTU for taking what they believe is both a reckless and illegal action.

A letter sent to unions by solicitor Colm Costello on behalf of Dublin Bus and Bus Éireann says the action is being taken "due to the Company's failure to provide adequate guarantees in respect of our members tenure & security of employment and their current Terms & Conditions as a direct consequence of the plans to tender out 10% of current PSO routes".

He says that any alleged impact on union members' tenure and security of employment is entirely outside the control of the companies.

The solicitor warns that if the unions persist in proceeding with this action, the companies will have no alternative but to issue proceedings immediately seeking damages for the losses suffered as a result of this unlawful action as well as costs. 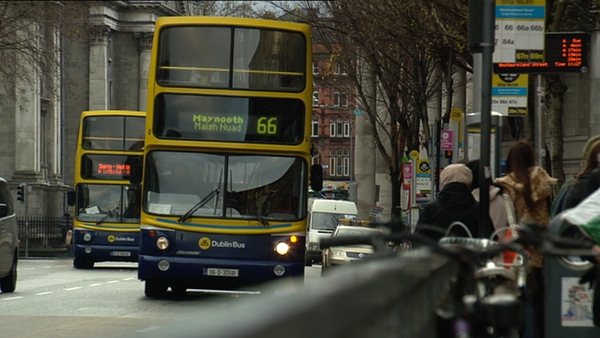