Documents released on the Department of Finance website show the department had deep concerns about a number of aspects of the running of Irish Bank Resolution Corporation in the first half of 2012.

In particular, the department was concerned about the appointment and pay packages of senior executives and the appointment of external advisors, notably US group Blackstone.

It also had concerns about communications between IBRC and developer Paddy McKillen, and the sale of Siteserv and a US apartment development called Apthorpe.

While much attention has focused on earlier releases of documents related to the Siteserv sale, today's release shows a much wider problem in the relationship between the Department of Finance and the board and senior executives of IBRC.

Former IBRC chairman Alan Dukes responded to the reports of recent days at a press conference this afternoon.

Department officials focused on what they called "issues" with the governance of IBRC, rather than the commercial aspects of the Siteserv and Apthorpe sales.

In particular, the officials were concerned about the flow of negative information from IBRC - such as media reporting of the Siteserv sale - which was not a feature of the department's dealings with AIB and Bank of Ireland.

The continuing media reporting and Parliamentary Questions around IBRC in general and Siteserv in particular appear to have precipitated the department's action against IBRC in the spring of 2012.

In particular, the department notes said that senior executives at IBRC had discussed concerns about the sale of the New York luxury apartment scheme Apthorpe, but these concerns had not been relayed to the board of IBRC.

As a result they had not been communicated to the department.

In an internal briefing note questioning the way in which the sale of IBRC's interest in Apthorpe was handled, the officials noted that the process used a "bespoke" method of valuing the asset, rather than the method agreed with the European Commission in its approval for the State-supported restructuring of the bank.

It appears from the documents concerns had been raised internally in IBRC by a person described in other documents as "the whistleblower".

At a later meeting with the department's head of banking, Anne Nolan, former chairman Mr Dukes and IBRC's former chief executive Mike Aynsley explained Apthorpe had been sold as part of Anglo's US portfolio.

They said that while holding onto some of these US assets might have yielded higher returns, the strategic decision - agreed with the Department of Finance - was to sell Anglo's US portfolio in its entirety.

Ms Nolan replied that the issue was not the commercial aspects of the sale, but the governance issues raised by it.

Other issues between the department and IBRC centred on the appointment of senior staff, particularly a chief finance officer and a chief risk officer.

The chief finance officer role had been filled without approval from the department, which described the action as "totally unacceptable".

A note on a response from Mr Dukes on the appointment of the CFO said it "failed to address the issues, misrepresented facts, disregards the ministers statutory responsibilities, and abrogates the ministers role and authority as set out in the Relationship Framework" - the rules governing the relationship between the department and IBRC.

He sought and received assurances that future requests would be dealt with promptly by the department.

This appointment seems to have led the department to demand that it appoint an executive director - effectively a deputy chief executive - to IBRC.

The new chief finance officer and chief risk officer would report to this department appointee. The department also wanted to attend board meetings.

Further friction between the department and IBRC is evident in relation to the pay and pension packages for senior IBRC executives.

The department and the minister expressed concern that there was "upward" pressure on pay for executives in IBRC, rather than "downward" pressure, in line with government policy.

The department said that IBRC had a very high number of staff paid more than €300,000 relative to other banks (eight in IBRC, 12 in AIB and two in PTSB).

It was particularly exercised over the hiring of a chief risk officer on a salary of €500,000 plus a 25% pension contribution.

The usual pension contribution for IBRC executives was 15-20%. At this pay level, only one other IBRC executive would be on more, leading, the department believed, to further pay demands from IBRC.

The department asked if commercial banks were really the benchmark for pay for IBRC, considering the nature of the work the organisation was doing.

It thought NAMA was a more suitable model, noting that unlike IBRC, NAMA seemed to have no difficulty attracting high calibre candidates at significantly lower pay and pension packages than those sought for IBRC executives.

Earlier, further details emerged about the breakdown of relations between the Department of Finance and IBRC over the sale of Siteserv and other issues.

In July 2012, three months after the sale of Siteserv, Mr Noonan told Mr Dukes he was "very uneasy" about the relationship between his department and IBRC.

According to the minutes of the meeting, released to the Irish Times under Freedom of Information, Mr Noonan told Mr Dukes his patience was wearing thin at that stage.

Meanwhile, sections of the letter written to Mr Noonan by lawyers for Mr Aynsley have been released by broadcaster TV3.

The letter states that the documents released were "almost entirely redacted save for paragraphs where the character and reputation of our client was impugned to a degree that is designed to damage the reputation and standing of Mr Aynsley".

My Aynsley's solicitors say their client "has been personally targeted in this manner by officials of your department. The document released is a serious attack on an internationally respected and highly experienced banking expert who was employed as CEO of an Irish bank that was in crisis at the time and to oversee its orderly wind down.

"The only explicable rationale for this highly personalised vilification of our client in the briefing note was that during the period in question, officials of the Department of Finance were attempting to influence the process through which various transactions were completed by IBRC.

"This was done with disregard to principles of good governance and the independence of a bank board to which our client as CEO reported.

"It was to this independence that your officials took umbrage."

The Department of Finance says it is making no comment on the correspondence.

However, an official pointed out that the release of Freedom of Information documents is decided by an independent officer in the department, and it is not the function of the minister to be involved.

In relation to property developer Mr McKillen, court action in the UK had resulted in the disclosure of text messages between Mr Aynsley and Mr McKillen.

Minutes of a meeting with Mr Noonan in July 2012 show Mr Aynsley explaining this by saying Mr McKillen does not use e-mail, and texting is his (McKillen's) preferred method of communication.

He stated that he had had about four lunches/dinners with each man.

Mr Aynsley has written to Minister for Finance Michael Noonan alleging he has been personally vilified by the department's selective release of documents. 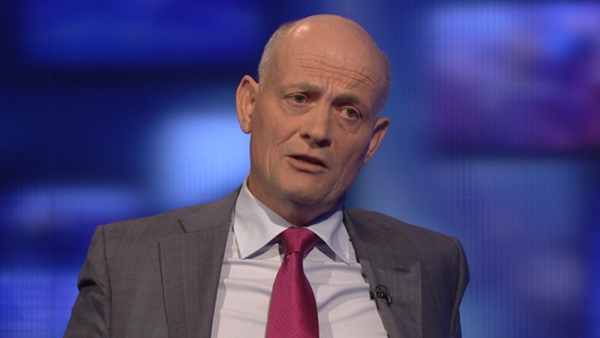 Walter Hobbs: O'Brien Siteserv offer accepted because it was best