Armenia marked the centenary of a mass killing of Armenians by Ottoman Turks with a simple flower-laying ceremony attended by foreign leaders as Germany became the latest country to respond to its calls for recognition that it was genocide.

Turkey denies the killing of up to 1.5 million Armenians in what is now Turkey in 1915, at the height of World War One, constitutes genocide and relations with Armenia are still blighted by the dispute.

Parliament in Germany, Turkey's biggest trade partner in the European Union, risked future diplomatic relations with Ankara and upsetting its own many ethnic Turkish residents by joining the many Western scholars and two dozen countries to use the word.

Its resolution, approved overwhelmingly, marks a significant change of stance in a country which has worked hard to come to terms with its responsibility for the murder of six million Jews in the Holocaust.

Turkish President Tayyip Erdogan said on Friday he "shared the pain" of Armenians, but as recently as Thursday he again refuted the description of the killings as genocide and has shown no sign of changing his mind.

The French and Russian presidents, Francois Hollande and Vladimir Putin, were among guests who each placed a yellow rose in a wreath of forget-me-nots at a hilltop memorial near the Armenian capital Yerevan and led calls for reconciliation. 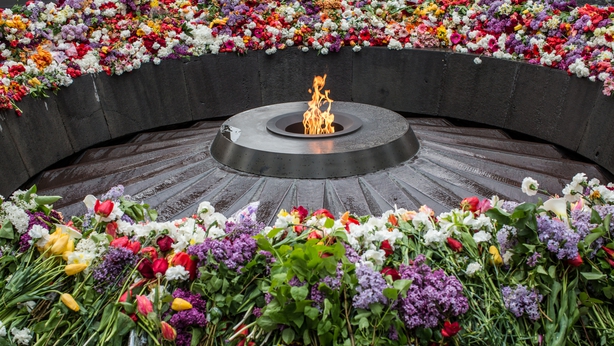 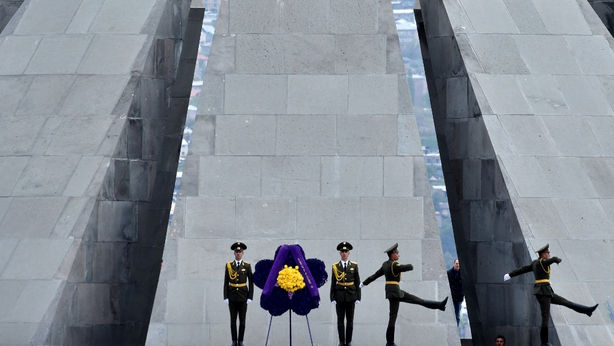 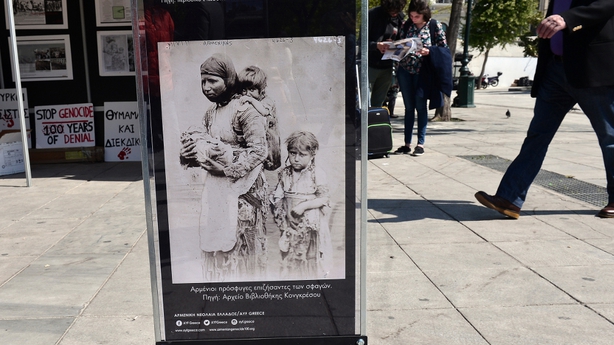 "Recognition of the genocide is a triumph of human conscience and justice over intolerance and hatred," Armenian President Serzh Sarksyan said in his speech.

In a speech at the ceremony that was met by warm applause, Mr Hollande said a law adopted by France in 2001 on recognition of the killings as genocide was "an act of truth".

"France fights against revisionism and destruction of evidence, because denial amounts to repeat of massacres," he said, describing his own attendance as "a contribution to reconciliation".

Mr Putin warned that neo-fascism and nationalism was on the rise in the world, terminology he uses to describe what Russia regards as radical elements in Ukraine, whose forces are trying to put down a rebellion by pro-Russian separatists in the east.

He said Russia believed mass killings could not be excused under any circumstances since it was the initiator of or party to a number of core international laws, including the convention on the prevention and punishment of genocide.

His words provoked an angry response from Turkey.

"Considering the mass killings, exiles...that Russia has carried out in the Caucasus, Central Asia and in eastern Europe over the past century...we think it should be the one that knows best what genocide is and what its legal dimensions are," a Turkish foreign ministry statement said.

The European Parliament also refers to the killing in 1915 as genocide, as did Pope Francis this month, prompting Turkey to summon the Vatican's envoy and recall its own.

Other countries, including Ireland and the United States, have refrained from doing so.

Predominantly Muslim Turkey, which has no diplomatic ties with Armenia, says many Christian Armenians were killed in partisan fighting during the war but denies it amounted to genocide.

It says there was no organised campaign to wipe out Armenians and no evidence of any such orders from the Ottoman authorities.

In February, Armenia, a poor country of 3.2 million that for decades was part of the Soviet Union, withdrew landmark peace accords with Turkey from parliament, setting back US-backed efforts to bury a century of hostility between the neighbours.

However, Mr Sarksyan said yesterday he was ready to normalise relations with Turkey, stating that there should be no preconditions in restarting the peace process and would not insist the Turks accept they committed genocide.

In another sign of reconciliation, European Affairs Minister Volkan Bozkir attended a memorial service at the Armenian Patriarchate in Istanbul, the first time a Turkish government official has taken part in commemoration events since 1916. 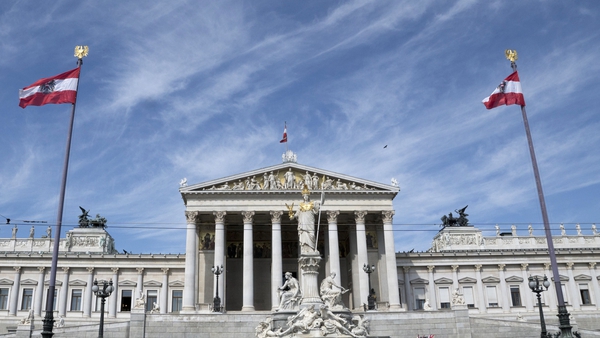