Former AIB executive Donal Forde has told the inquiry into the banking crisis that he did not challenge credit policy during the boom and did not foresee the scale of the collapse.

Mr Forde said credit policies were inappropriate at the advanced stage of the economic cycle and that was a serious misjudgement.

He said that it was substantially true that the Irish division he headed up brought the bank down due to the weight of construction loans.

And he said credit policies were not appropriate.

Asked about taking home a salary of more than €1m in one year by Deputy Joe Higgins, Mr Forde said: "It seems an inordinate amount of money in hindsight and the level of bank salaries seem silly now."

He said they were not chasing Anglo, they were chasing the pack, and were regularly challenged as to how they would keep pace

He said he knew they were in breach of limits on property lending but his  understanding was that regulator believed old limits had to change so they were redundant.

Mr Forde said: "At no point did I ever consider was happened possible."

He said:  "We did lose sight of the cycle," and  added "I was misled into the view we were going into an economic transformation that was sustainable."

He said the assumptions that guided loans were not conservative enough.

"We did not anticipate the confluence of things that came about," he said.

Former chairman of AIB Dermot Gleeson earlier told the banking inquiry that he had called Patrick Neary a "hopeless regulator".

Mr Gleeson gave his account of the night the controversial bank deposit guarantee was agreed.

He took part in some of the crisis meetings in Government Buildings on 29 September 2008.

Gleeson: AIB was asked by analysts during boom why can't you be more like Anglo? #bankinginqury

Mr Gleeson also told the inquiry that his bank loaned too much to individual developers and that some major credit decisions relating to developers were escalated to the board of AIB.

Mr Gleeson said the bank would get top-up requests that would suggest developers were getting into trouble.

"You would give them 100 million and then they would look for an extra 10 million," he said.

Mr Gleeson also told the inquiry that there was too much faith in cross-collateralisation and individual developers.

He said he wanted to express his sincere regret for his part in events and renewed an apology previously made.

He said it was "extremely regretful" and a "terrible event."

He added: "There is no excuse." And he said: "All I can do is come here and tell you as honestly and as frankly as I can what happened."

He confirmed that he thought AIB was solvent in 2008. He said he thought it may have become insolvent later but it was impossible to say when.

On the bank guarantee, Mr Gleeson said that on Sunday 28 September - the day before the meetings in Government Buildings - they were told at an AIB board meeting that INBS and Anglo would fail, although the timescale was not clear, and a limited guarantee would be put in place.

The following day he said he had a call from governor of Bank of Ireland, Richard Burrows, who said they should meet the Government.

Anglo’s share price had fallen 50% and the markets were fraught.

'We knew Anglo and Nationwide would fail'

Representatives of the two banks arrived at Government Buildings at 9.30pm.

Mr Gleeson said "we knew Anglo and Nationwide would fail". We said they should be "dealt with" by Government. He said he presumed this would mean they would be nationalised.

He said they did not ask for a blanket guarantee for all six banks and did not know that it had been put in place until they heard through the media the next morning.

He said the banks wanted all deposits and all senior bondholders to be covered by a guarantee but a blanket guarantee was not sought or discussed by AIB.

Mr Gleeson said the bank’s representatives were not present in the room when the decision was made.

He added that he was surprised the National Treasury Management Agency was not consulted.

He said he left Government Buildings at 2.30am.

Mr Gleeson said the Central Bank Governor told them there would be a disorder or a "fumble" if Anglo was dealt with mid-week.

AIB agreed to provide €5m along with €5m from Bank of Ireland to keep Anglo going until the weekend.

He said he told the CEO two days later that the bank's reputation had been damaged by the suggestion that it had asked for a blanket guarantee.

On AIB's model, he blamed earnings pressure and competition from Anglo.

He said Anglo was held up as an exemplar and everyone said it was the best bank and asked why AIB could not be more like Anglo.

He said AIB tried not to be but was inevitably drawn in.

Mr Gleeson said he did not recall comments from AIB's chief executive contained in a Department of Finance note from the night of the guarantee that AIB was facing "disaster" and mentioning bankruptcy.

He said he did not believe they had a solvency problem on the night and it was not asked or raised.

Asked by Chairman Ciaran Lynch whether the remuneration level was justified and appropriate, Mr Gleeson said clearly it was not appropriate and was too high but it was the market rate set by consultants.

Under questioning from Mr Lynch and Pearse Doherty, Mr Gleeson admitted AIB had brought what he described as a "slip of paper" to Government Buildings with a sketch of the scope of a possible guarantee.

The piece of paper is not contained in AIB's records and he believes it was left at the meeting.

Mr Doherty, Sinn Féin’s finance spokesperson, also raised Bank of Ireland's document outlining its version of a guarantee and he asked why Mr Gleeson had described in his notes that AIB's version was better.

He said he could not explain why AIB’s formula was better and could not remember if he had seen BoI's draft but said he may have.

Mr Doherty asked why €270m in dividends were paid out on 26 September 2008.  Mr Gleeson said that was a mistake.

Asked if he personally benefitted, he said he did and he did not, and added that he was sure he got the dividends.

He conceded that AIB thought Irish Nationwide was irretrievably "broke" in early September.

This stemmed from a meeting with the Financial Regulator on 6/7 September where it was suggested AIB would put €2bn into Anglo.

AIB executive Colm Doherty said that would involve a 50% writedown.

He said AIB was never asked to take over Anglo and never contemplated it.

He also said AIB had suggested a quote by the Financial Regulator in the Guarantee document attesting to the solvency of the whole system and all the banks be removed.

He said that was because they thought Anglo would be gone by the weekend. 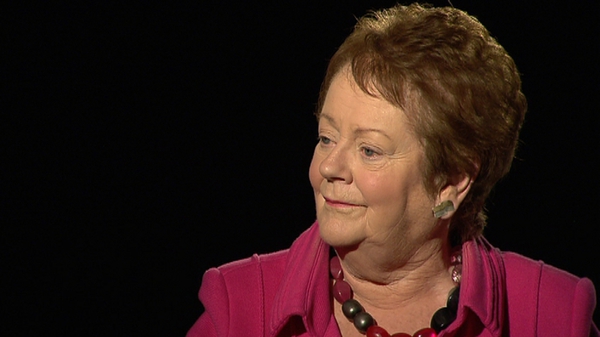 Mary O'Rourke has information that may be useful to bank inquiry