Minister for Transport Paschal Donohoe has said that the Labour Relations Commission is the most appropriate and effective forum to deal with the current dispute over the privatisation of bus routes.

Speaking on RTÉ's News at One, Mr Donohoe said he wanted to emphasis the urgency of engaging with the LRC.

He said we now faced a vista of dispute that will cause grave difficulty for public transport in the country.

"Yesterday morning commuters and the companies were facing two hours of planned industrial action next Friday, by the end of yesterday we're now facing seven days of planned action," he said.

“I think it's absolutely crucial that we understand if that magnitude of activity were to go ahead it would cause grave damage to commuters to public bus users all over the country and to the companies themselves, and we need to step back from the kind of dynamic we saw yesterday and engage with the Labour Relations Commission."

Mr Donohoe said he was required by legislation to open a tendering process for 10% of bus routes to deliver more value for taxpayers and better choice for bus passengers.

Unions at Dublin Bus and Bus Éireann have escalated their plans for industrial action over plans to put 10% of routes out to private tender.

SIPTU and the National Bus and Rail Union are now planning to hold two 48-hour stoppages on 1 and 2 May, as well as 15 and 16 May.

Unions at the two State bus companies fear that if 10% of bus routes are opened up to the private sector, it could trigger a deterioration in the pay and conditions of members.

Speaking on RTÉ's Morning Ireland, Bus Éireann spokesperson Nicola Cooke said the proposed seven days of strike action was unprecedented in the history of the company.

She said it had grave concerns of the impact it will have on the travelling public.

Ms Cooke said the protest action would cost the company millions of euro in lost revenue and hundreds of thousands in fines.

"A loss of seven workings days we've surmised would equate to almost 850,000 passenger journeys and a revenue loss of between €3m to €5 million.

“It's reputational damage. We would have to pay fines to the National Transport Authority because we wouldn't be delivering the services. You're talking hundreds of thousands of euro essentially."

Ms Cooke reiterated that the company was open to further talks with all concerned parties.

Business and tourism groups are warning of the economic impact, with some estimating that seven days of industrial action could cost retailers up to €20m. 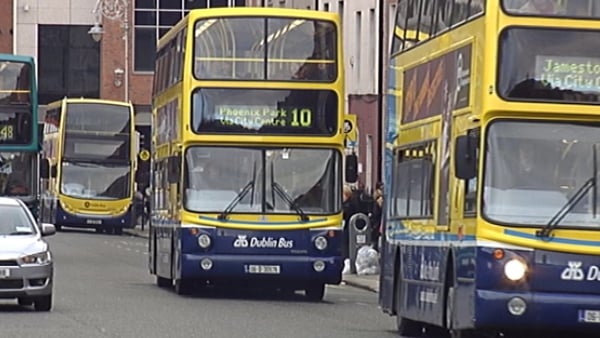 Bus services to be hit by strike action in May