The Association of Secondary Teachers, Ireland has voted unanimously to continue its opposition to the Government's Junior Cycle reform proposals.

Seventeen delegates spoke in favour of a motion calling for continued non-cooperation with the plan at the ASTI's annual convention in Killarney, Co Kerry. No one spoke against it.

Earlier today Minister Jan O'Sullivan criticised the decision of the teachers' unions not to allow members to participate in training for the reforms.

The training for English teachers is currently being rolled out, with the next sessions due to begin next week.

They were in the front line, she said, and the whole thing depended on them. Ms Wallis said she would rather go on hunger strike than assess her own students.

Andrew Phelan, who last year used a megaphone to heckle then education minister Ruairi Quinn, told delegates the union was doing a fantastic job in opposing the reforms.

He said he had been accused of being anti-democratic for not supporting calls for members to be re-balloted.

However he said it was not the union but the Minister for Education who was being anti-democratic in not accepting the union's position on the matter.

Prior to the vote, the delegate who proposed the motion said he had a message for Minister O’Sullivan.

If she had been in any way unclear as to where teachers stood on the issue, he said, well "by God she knew now".

Earlier, M O'Sullivan told the Teachers' Union of Ireland conference in Wexford, that the decision to prevent TUI members from accessing professional learning sits uneasily with the real commitment she believed they had to an openness to knowledge and learning.

The minister said that she is ready and willing to engage with unions on the range and extent of resources needed to implement the Travers' proposals on Junior Cycle assessment.

However, she acknowledged that those proposals do not contain everything she would have wished for.

She said she had already put in place a team of experienced teachers in the Junior Cycle for teachers service to deliver up to 16 days of professional development.

The TUI has passed a motion reaffirming its mandate for industrial action over the Junior Cycle reforms.

The motion says the mandate for industrial action should continue until a satisfactory outcome is achieved on external assessment, state certification and capacity at school and individual level.

Another motion urged the union to insist that the setting, supervising and correcting of exams, projects and portfolios for the new Junior Cycle must not form part of a teacher's contract.

Speakers outlined the difficulties facing English teachers who had a lack of clarity about proposed changes, and described the Travers' proposals as "incomplete".

Dr Pauric Travers chaired talks earlier this year between teachers and the Department of Education aimed at resolving the dispute.

Dr Travers backed the minister's view that proper reform required teachers to assess 40% of their own students' work, with a further 60% to be assessed by the State Examinations Commission through a formal written exam.

He suggested that these two aspects should be kept separate, even on the final certificate.

However, they warned that teachers potentially faced more work and a greater encroachment on their time due to additional workload.

In a joint statement issued this morning the ASTI and the TUI said the Junior Cycle dispute was now at a critical stage.

Ms O’Sullivan said that every time she has moved to accommodate teachers concerns she has been asked to move again.

Speaking on The Pat Kenny Show on Newstalk, she said this was not acceptable.

The minister said the unions accepted an independent chairperson to adjudicate on concerns and the unions should now listen to this chairperson's proposals.

"Every time we get to a point where I have moved to some extent having listened to their concerns there's always something more. And that's not acceptable."

"That isn't negotiations. And I'm not going to completely capitulate in the interest of the reforms we need."

She said if unions were to make an election issue out of it in 2016 it would be a big disservice to the students of Ireland.

TUI General Secretary John MacGabhann said his union's priority was pay restoration and to close the pay gap between newer and older teachers.

Speaking ahead of Ms O'Sullivan's address, Mr MacGabhann said the minister is "on message" for the Government to dampen down expectations of teachers.

He said the TUI wanted the "discriminatory" pension levy scrapped. He also said that a pay gap between older and newer teachers was "unfair and unrealistic".

Mr MacGabhann refused to put a timeframe on the restoration of pay cuts for fear of heightening or dampening expectations.

He said the TUI had "nailed our colours to the mast" when it came to the pay gap between older and newer teachers.

He said: "It should be a matter for the concern of the morale of the profession and a concern for fairness."

However, he said the equalisation of pay would not be prioritised over pay restoration over all.

He said: "Both things should move together. The pay restoration issue for most recently recruited members is a thing in and of itself and needs to be addressed. It should be regarded on its merits and should be remedied as it is discriminatory."

He said it was "cheeky" for the Government to suggest it should get increased productivity for the pay it had already taken. 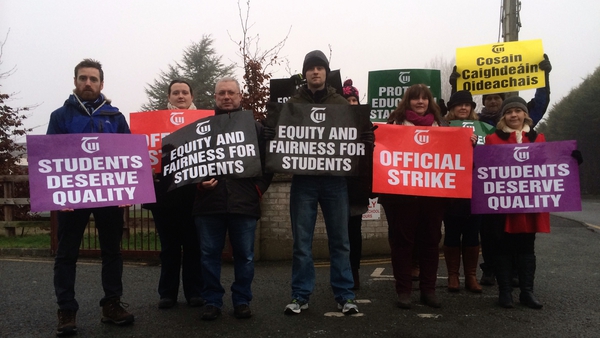