The death toll from yesterday's attack on a Kenyan university massacre has risen to 148 people, Kenya's interior minister said as operations to recover bodies concluded.

The final toll from the attack on the college in the northeastern town of Garissa included 142 students, three police officers and three soldiers, Interior Minister Joseph Nkaissery said.

"We have called off the operation after combing the whole university, all the bodies have been removed from the scene and brought to Nairobi," Mr Nkaissery told reporters, after arriving back in the capital from Garissa.

"This is a very sad moment for us as a country, and I urge calm and total cooperation with the security personnel to make Kenya safe," he added.

Earlier,  Pope Francis condemned the assault, calling it an act of "senseless brutality".

"In union with all people of good will throughout the world, His Holiness condemns this act of senseless brutality and prays for a change of heart among its perpetrators," Vatican Secretary of State Cardinal Pietro Parolin said in a statement.

Cardinal Parolin said the pontiff called upon "all those in authority to redouble their efforts to work with all men and women in Kenya to bring an end to such violence".

Francis has expressed alarm over the plight of Christians targeted for their faith, particularly by the self-styled Islamic State in the Middle East.

He said the international community would be justified in using military force as a last resort to stop "unjust aggression".

Mr Nkaissery vowed the country would not bow to terrorist threats, saying "Kenya's government will not be intimidated by the terrorists who have made killing innocent people a way to humiliate the government." 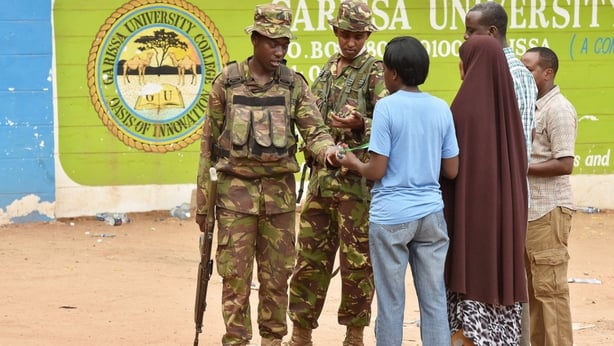 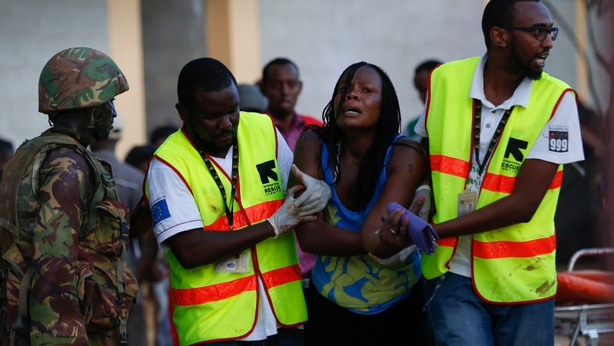 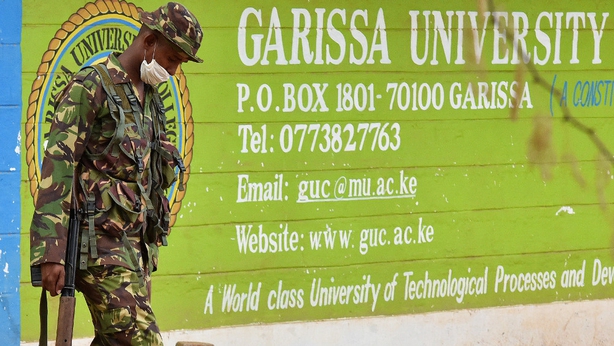 Kenyan authorities issued a dusk-to-dawn curfew on four regions near the Somalia border, after gunmen stormed the university yesterday.

A siege ended nearly 15 hours after the Somali group's gunmen shot their way into the Garissa University College campus in a pre-dawn attack, sparing Muslim students and taking many Christians hostage.

Mr Nkaissery said four gunmen strapped with explosives were behind the attack, the same number that killed 67 people during the 2013 killings at a shopping mall in Nairobi.

Police and soldiers surrounded the campus and exchanged gunfire with the attackers throughout the day but were repeatedly repelled.

At least 79 people were injured and many were airlifted to Nairobi, Kenya's national disaster body said.

Authorities offered a reward for information leading to the arrest of a man called Mohamed Mohamud, described as "most wanted" and linked to the attack.

Al-Shabaab, who carried out the deadly attack on the Westgate mall in Nairobi, claimed responsibility for the raid on the campus in Garissa, a town 200km from the Somali border.

The group has links to al-Qaeda and a record of raids on Kenyan soil in retaliation for Nairobi sending troops to fight it in its home state of Somalia. 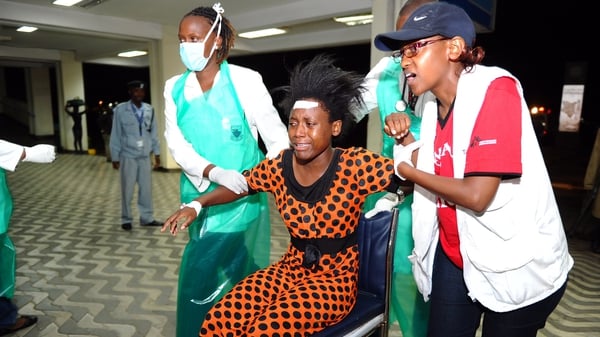