California has announced sweeping state-wide water restrictions for the first time in history in order to combat the region's devastating drought, the worst since records began.

Governor Jerry Brown issued the declaration at a press conference in a parched, brown slope of the Sierra Nevada mountains that would normally be covered by deep snow.

"Today, we are standing on dry grass where there should be five feet (1.5 meters) of snow," Mr Brown said.

The executive order issued by Mr Brown aims to achieve a 25% reduction in water usage across cities and towns throughout California by a combination of measures.

"As Californians, we must pull together and save water in every way possible," Mr Brown said.

The reductions would be achieved by ramping up enforcement to prevent wasteful water use while investing in technologies designed to make California more drought-resilient.

Mr Brown had already declared a state of emergency in California over the crippling four-year drought, the most severe on record. 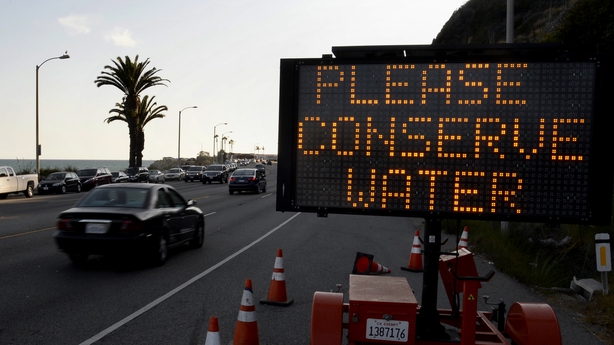 The drought has left swathes of California's landscape unrecognisable, with normally brimming lakes and rivers now dry and losses to the state's agricultural industry estimated at several billion dollars.

The State Water Resources Control Board, which manages California's water supply, would be tasked with achieving the reduction.

The order also set out new measures to reduce water use, including the replacement of 4.6 million square meters of lawns with drought-tolerant landscaping.

A state-wide consumer rebate programme would also be set up to encourage individuals to replace old appliances with modern, water and energy efficient models.

The measure orders campuses, golf courses, cemeteries and other large consumers of water to significantly cut use.

New homes and developments would also be banned from using potable water for sprinkler systems unless water-efficient drip irrigation systems are used.