Yemen's foreign minister has called for a Saudi-led military coalition targeting Shia rebels in his country to send ground troops.

Riyadh Yassin said that he is calling for a ground offensive as he believes ongoing air strikes will become ineffective over time.

His appeal coincided with warnings from aid groups about a brewing humanitarian crisis and civilian casualties in Yemen, where the coalition began air strikes a week ago.

Mr Yassin, who was speaking from the Saudi capital alongside Yemeni president Abd-Rabbu Mansour Hadi, said ground forces would cause "less civilian casualties".

He added the main reason he was proposing a land operation was to enable aid deliveries.

A spokesman for the coalition said yesterday that "so far there is no need for land intervention" in Yemen, adding that the need might arise "at any time".

Overnight, the Saudi-led coalition bombarded rebel positions in Yemen's main southern city of Aden in a seventh night of raids that also targeted the capital and other areas.

The strikes on Aden were focused on the rebel-held provincial administration complex in Dar Saad in the north of the city, according to a military official.

He said there were "many dead and wounded" among the Houthi Shia rebels but was unable to give a precise toll.

The coalition has vowed to keep targeting the Houthis and allied army units loyal to former president Ali Abdullah Saleh until they end their insurrection.

Iran is also accused of backing the rebels, but denies providing military support.

The headquarters of a renegade army brigade loyal to Mr Saleh was targeted overnight in the north of Aden, as well as the city's international airport, the military official said.

Militia fighters loyal to Mr Hadi have captured 26 Houthis during the fighting in Aden, one of their leaders said.

In the western port city of Hodeida, four civilians were killed and ten injured when a dairy was hit in the night, medical sources said.

The circumstances of the bombing were unclear, with some witnesses saying the dairy was hit by a coalition air strike and others blaming forces loyal to Mr Saleh.

Six other civilians were killed in an air raid targeting Maydi in the northwest province of Hajjah, according to medical sources.

Coalition planes also targeted camps of the Republican Guard, which is loyal to Mr Saleh, around the capital city of Sanaa and in the central region of Ibb overnight, according to residents.

Several Houthi positions were also targeted in the northern rebel strongholds of Hajjah and Saada.

After entering the capital in September, the Houthis and their allies gradually conquered areas in the centre, west and south before bearing down on Aden last month, prompting Mr Hadi to flee to Saudi Arabia.

The UN said on Tuesday that at least 93 civilians had been killed and 364 injured since the nearly week-old Saudi-led air campaign began. 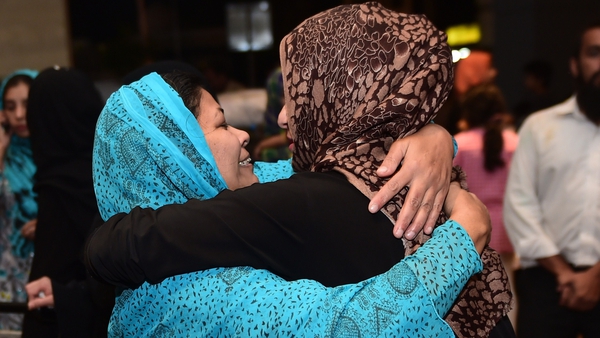 45 killed in air strike on refugee camp in Yemen