Taoiseach Enda Kenny has said the sense of injustice held by the families of those killed in a British army operation in west Belfast in 1971 needs to be dealt with.

Mr Kenny voiced support for the Ballymurphy families' campaign for justice as he visited the scene of the shootings.

"For me this is as raw as it can be," he said of the families' feelings.

"There is a sense of injustice amongst this community and that needs to be dealt with."

Ten of those were shot while another man died of a heart attack following an alleged violent confrontation with soldiers.

Last year the British government rejected an independent re-examination of the shootings.

A fresh inquest is being held into the ten deaths caused by gunfire but relatives are unhappy at the length of time state organisations are taking to disclose files to the coroner's court.

Mr Kenny met families and toured an area of Ballymurphy where four of the victims were shot.

The 'Ballymurphy Massacre' took place following the introduction of internment without trial on 9 August 1971 when the RUC, backed up by British soldiers, began raiding homes in nationalist areas of Belfast.

Speaking with Ballymurphy families this morning- we are setting example for full disclosure & expect same from others pic.twitter.com/qH8X2iOp5D

Soldiers claimed they had come under attack and returned fire.

But relatives have demanded an acknowledgement that their loved ones were wrongfully killed.

In 2010, Prime Minister David Cameron apologised for the actions of the paratroopers on Bloody Sunday after a long-running public inquiry by Lord Saville found the shootings had been unjustified, as the victims posed no threat.

But last year, the government rejected calls for a inquiry - on a smaller scale - into the events in Ballymurphy, insisting it was not in the public interest.

The new inquest was ordered by Northern Ireland's Attorney General John Larkin in 2011.

That move came after a cold case review of the deaths by the Police Service of Northern Ireland's Historical Enquiries Team.

John Teggart, whose father Danny was one of those killed in 1971, said the families in the support group considered them Irish citizens and they welcomed the decision of Mr Kenny to visit where their loved ones had died.

Mr Kenny's meeting with the relatives comes a day after he met with relatives of the ten Protestant workers killed by the IRA at Kingsmill in 1976. 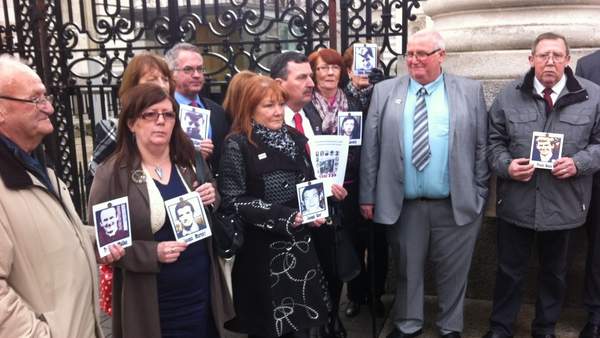