The shooting of two US police officers during a protest rally in Ferguson, Missouri, sparked an intense manhunt for suspects and ratcheted up tensions in a city at the centre of a national debate over race and policing.

US President Barack Obama and Attorney General Eric Holder condemned the attack on the officers, who were treated at a local hospital and released.

Hours after the shooting, police said they were questioning an undisclosed number of people following a raid on a home in the St Louis suburb.

"What happened last night was a pure ambush," Mr Holder said at a press conference. "This was not someone who was trying to bring healing to Ferguson, this was a damn punk."

With organisers vowing more protests tonight, St Louis County police and the state's Highway Patrol will take over security from the local force at any demonstrations.

Security was similarly stepped up after rioting erupted in November, when a grand jury brought no charges against a white officer who fatally shot a black teenager, an incident that touched off a national wave of demonstrations.

Since 18-year-old Michael Brown's killing in August, protesters have rallied regularly in Ferguson, where tensions between African-Americans and a mostly white police force have smouldered for years.

The incident unfolded while protesters were gathered at Ferguson police headquarters to demand more changes in the wake of the resignation of its long-criticised police chief, Tom Jackson, who quit a week after the release of a scathing US Justice Department report that found his force was rife with racial bias.

Investigators wasted no time in bringing people in for questioning. A law enforcement team in tactical gear surrounded and swarmed into a home near the scene of the shooting, and television images showed officers breaking through the roof with heavy tools.

Shawn McGuire, a St. Louis County police spokesman, would not confirm media reports that two men and a woman were led away in handcuffs but he said people were taken in for questioning. There were no arrests so far, he said.

Mr Belmar said the shooter used a handgun and shell casings had been recovered. Two Missouri congressman offered a $3,000 reward for information leading to an arrest.

The shooting came less than three months after a man ambushed two New York City patrolmen, seeking to avenge the killings of Brown and an unarmed black man in New York.

Mr Belmar, who said police did not return fire, asserted the gunfire came from the middle of the crowd.

"I don't know who did the shooting but somehow they were embedded in that group of folks," he said.

Protesters at the scene insisted the shots came from further away. 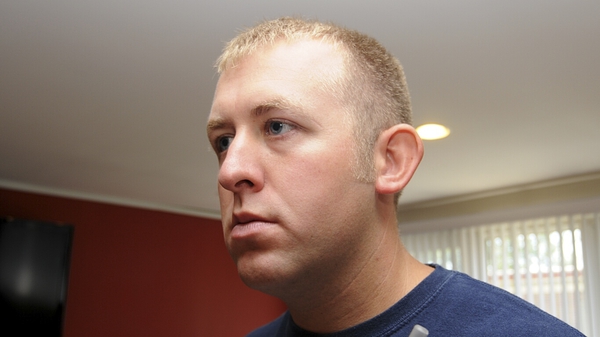