Aid agencies, in a scathing new report, have said 2014 was the worst year of the Syrian conflict so far and that three United Nations Security Council resolutions aimed at alleviating the suffering had failed.

The report condemns the world's most powerful countries for not having the will to enforce their own UN resolutions on the free flow of humanitarian aid to the victims, four years into the conflict this week.

Syria's crisis started in March 2011 with protests against the government and descended into a civil war that has killed more than 200,000 people.

The UN resolutions passed last year demanded an end to arbitrary killing and torture, and the removal of barriers to aid access imposed by the Syrian government and insurgents.

Oxfam and Save the Children are two of 21 humanitarian and human rights organisations that wrote the report.

It said Security Council members, which include Russia and the United States, had not implemented their own resolutions by failing to pressure warring parties to stop indiscriminate killing and increase aid access.

In 2014, the United Nations said the Syrian government had approved less than half of its convoys to besieged or "hard-to-reach" areas of Syria.

The UN is also not working in large areas of Syria run by the hard-line Islamic State militant group.

In 2013, 71% of the funds needed to support civilians inside Syria and refugees in neighbouring countries were provided. In 2014, this had declined to 57%.

A resolution adopted in July authorised the UN to undertake cross-border aid operations without consent from Damascus.

But the report said these had been hampered by restrictions from neighbouring countries, which include Turkey and Jordan.

Ireland's Catholic bishops said a Syrian bishop has told them he is deeply concerned about the perceived indifference of western countries to the persecution of his people.

The Irish bishops also called for a generous response to the annual Good Friday church collection for Christians in the Holy Land in a statement following their regular Spring meeting, which described the situation in Syria as "one of the gravest humanitarian disasters since the Second World War".

Meanwhile, a separate report released this week by two UN agencies working in Syria painted a dire picture of life four years into the conflict.

The population has shrunk by 15% and life expectancy has dropped 24 years, from an average of 79 to 55, it said.

The country's GDP has dropped by nearly €114bn and four out of every five Syrians live below the national poverty line.

Half of all school children have not attended school for the past three years, the report said.

Meanwhile, only 57% of the funds needed to support Syrians who have fled their homes have arrived, plunging from 71% in 2013. 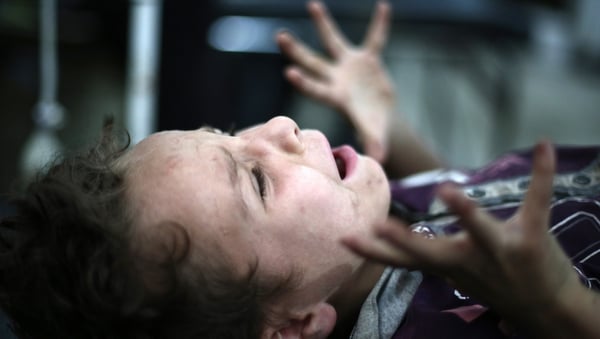